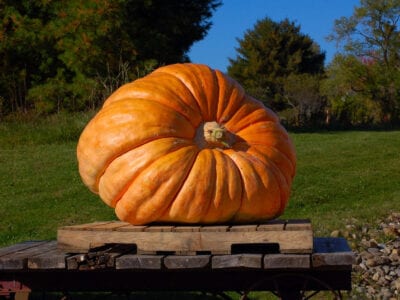 Ever been to the county fair and marveled at the mammoth blue ribbon pumpkins on display or other giant veggie varieties? Perhaps you have wondered how on earth they grow these giant vegetable plants. Despite their massive size, growing huge vegetables requires a lot of TLC, intensive prep work, and patience. Gird yourself with these and the following information about giant vegetable plants, and you too may find yourself with a ribbon or a trophy; at the very least you will have fun!

Seeds, although a bit pricey, can be purchased from seed catalogs for giants such as:

Other giant veggie varieties of seeds specifically chosen for their inordinate sizes are:

Another option for growing huge vegetables is to save seed from particularly large produce which you have grown for sowing the following season; this doesn’t work with hybrids though.

How to Grow Giant Vegetables

Enticing isn’t it? Now the question is how do we grow giant vegetables? Number one order of business is soil. Growing giant veggie varieties must have nutrient rich, well draining soil. It’s a great idea to amend the soil with as much organic matter as possible along with nitrogen prior to winter. Then in the spring, till the soil as deeply as you can, especially if growing giant root crops, like carrots, since they need lots of loose soil for their huge roots. Also, creating raised beds to encourage better drainage of the giant vegetable plants is a plus and be sure to plant the giant in full sun.

Fertilization is, of course, key. The large pumpkin, squash, and melon varieties may need liquid fertilizer once a week, while the smaller root crops need a bit less frequent feedings. Leafy veggies, such as cabbage, require high nitrogen fertilizer. The type and frequency of feeding is dependent upon the type of veggie you are growing. A slow release organic fertilizer that continuously feed the giant over the course of the season is ideal. A rule of thumb is to fertilize with high phosphorus food before plants are pollinated and high potassium content once fruit is set. Organic gardeners should water daily with compost tea.

Plant your giant veggie varieties as soon as possible in the spring to take advantage of the longest possible growing season and water them well. These giants need water! You may water by hand if you only have a few plants or drip irrigate. Drip irrigation provides the boon of a slow supply of water to the roots and is more effective than large amounts delivered less frequently, which can stress your giant babies out and result in cracking the fruit.

Okay people, if you are like me, this is the tough part. Remove all the veggies from the plant except 2-3 of the healthiest with the eventual goal of removing all except the best one to encourage the plant to put all of its energy into growing a giant. Place a porous mat under the growing giant to protect it from rot and pests and keep the giant clean. Inspect daily for pests and take immediate (using non-toxic methods like hand picking) action to exterminate them. Keep the area around your prize weed free.

Another question you may have upon beholding your giant vegetable is “are giant vegetables edible?” Well, they could be eaten, but often giant veggie varieties are grown for the attribute of their shocking size, not flavor. Chances are you are growing the giant for bragging rights anyway and not to consume, so enjoy the novelty and excitement of growing the “biggun” without thought to actually eating it.

Be patient when growing your giant and talk to other folks who have successfully grown giant vegetables. They will often be a font of information as well as proud to share their success stories.