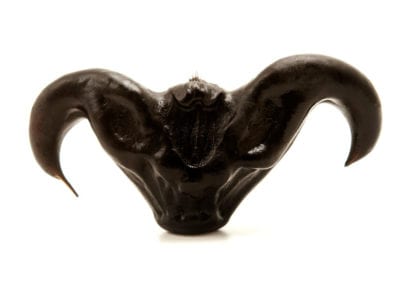 Water caltrop nuts are cultivated from eastern Asia to China for their unusual, edible seed pods. The Trapa bicornis fruit pods have two downward curving horns with a face that resembles a bull’s head, or to some, the pod looks like a flying bat. Common names include bat nut, devil’s pod, ling, and horn nut.

Trapa comes from calcitrappa, the Latin name of the caltrop, referring to the strange fruits. The caltrop was a medieval device with four prongs that was thrown on the ground to disable the enemy’s calvary horses during European warfare. The term is more relevant to the T. natans water caltrop nuts that have four horns, which incidentally, were introduced into the U.S. in the late 1800s as an ornamental and is now listed as invasive to the waterways in northeastern U.S.

What are Water Caltrops?

Water caltrops are aquatic plants that lodge in the soil of ponds and lakes and send up floating shoots topped with a rosette of leaves. A single flower is born along the leaf axils which produces the seed pods.

Water caltrops require a sunny situation in a still or softly flowing, slightly acidic water environment with rich soil to thrive. The leaves die back with a frost, but bat nut plant and other caltrops return from seed in the spring.

Sometimes referred to as water chestnuts, caltrop bat nuts are not in the same genus as the crunchy white vegetable root often served in Chinese cuisine (Eleocharis dulcis). The lack of distinction between them is often a source of confusion.

The dark brown, hard pods contain a white, starchy nut. Similar to water chestnuts, the bat nuts have a crunchy texture with a mild flavor, often sauteed with rice and vegetables. Bat nut seeds should not be eaten raw, as they contain toxins but are neutralized when cooked.

Once roasted or boiled, the dried seed also can be ground into a flour to make bread. Some seed species are preserved in honey and sugar or candied. Propagation of water caltrop nuts is by seed, harvested in the fall. They must be stored in a small amount of water in a cool location till ready for spring sowing.