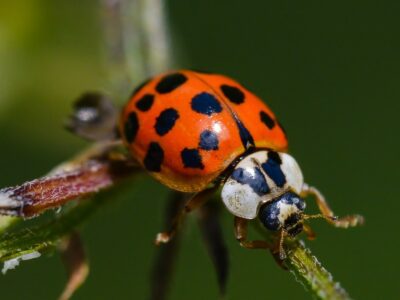 There are approximately 5,000 species of lady beetles worldwide. While most species are considered beneficial, the Asian lady beetle has earned a reputation as a nuisance bug. This non-native species invade homes and businesses in large swarms from September through November.

The harlequin or multicolored Asian lady beetle (Harmonia axyridis) has its origins in Asia, but these bugs are now found worldwide. Like other species of ladybugs, the Asian lady beetle feeds upon aphids and other garden pests. When comparing Asian vs. native lady beetle behavior, the major difference is native ladybugs overwinter outdoors.

While it’s easy to think Asian lady beetles come inside to escape the cold, studies have shown they are attracted to contrasting vertical stripes similar to the markings seen on rock cliffs. This pattern on homes and buildings draws the nuisance bugs when searching for a suitable spot for hibernation.

Not only is an indoor swarm of ladybugs a nuisance, but the Asian beetle’s defense mechanism is the release of a foul-smelling fluid that stains floors, walls, and furniture. Swatting or stepping on them activates this response.

Lady beetles can also bite, with the Asian bug being a more aggressive species. Although ladybug bites don’t penetrate the skin, they can elicit an allergic reaction. Hives, coughing, or conjunctivitis from touching the eyes with contaminated hands are common symptoms.

In addition to being an indoor nuisance, Asian lady beetles also compete with native ladybug species for life-supporting resources. Learning the visual differences between the two types makes identifying ladybugs much easier. When comparing Asian vs. native lady beetle species, here’s what to look for:

Learning the differences between lady beetles can help gardeners encourage native species and prevent Asian species from invading their homes.