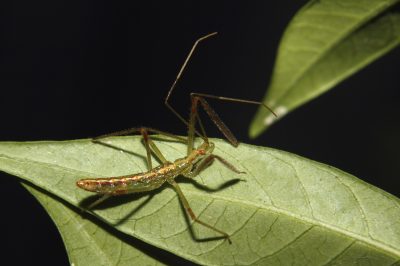 Beneficial insects are crucial to healthy gardens. The assassin bug is one such helpful insect. What do assassin bugs look like? Recognizing this garden predator as a good garden helper rather than a potentially scary threat puts a natural perspective on the normal cycle of life in your landscape. Assassin bug identification will also prevent some nasty and very painful bites that may occur accidentally.

Assassin bugs occur in much of North America but also in Central and South America, Europe, Africa, and Asia. There are several species of the insect, all of which are natural ambush hunters that inject a toxin into prey that dissolves their soft tissues. These bites are fatal to their insect victims but may also cause allergic reactions in humans, resulting in painful itching and burning at the injection site.

Assassin bugs have several stages of life. Assassin bug eggs may be found in cracks, under rocks, and in other sheltered locations. The tiny clusters of eggs hatch to become assassin bug nymphs, which are the larvae of the insect. Assassin bug nymphs are less than ½ inch (1.5 cm.) long and are orange and black striped with an almost translucent base color.

The adult form of the insect may grow up to an inch (2.5 cm.) in length. These have a 3-part body consisting of a head, thorax, and abdomen. The head is cone-shaped and sports a curved beak from which the insect injects its toxin. They also bear long antennae and six long legs. Assassin bug identification also notes that the insect is beige with black markings and folded wings perched on its back.

How Long Do Assassin Bugs Take to Hatch?

Assassin bug eggs are laid in summer, but how long do assassin bugs take to hatch? Eggs will hatch shortly after they are laid; however, it can take an entire year for nymphs to reach maturity. Young insects overwinter in bark, under logs, and in crevasses. They are semi-dormant during the winter and will molt in spring, with their final adult form revealed in June.

That is a whole year from hatching and produces only one generation of assassin bugs per year. The wingless nymphs grow and molt 4 times, and in some species 7 times, over the course of the year. The adult form is achieved once the insects have wings.

Assassin bugs inject poison into their prey through their beak. This proboscis-like appendage delivers the toxin into the vascular system and causes almost instant immobilization and simultaneous liquefaction of internal fluids. These fluids are sucked out of the prey. The prey is left behind as just a husk.

If you are unlucky enough to get an assassin bug bite, you will know it. The pain is quite sharp and intense. Most people who get bitten simply get a red bump with some accompanying itching once the pain fades. However, some people are actually allergic to the toxin and more intense experiences face these sensitive individuals.

The bug’s toxin is never fatal but it can cause increased pain, swelling, and itching that can last several days to a week. For this reason, assassin bug identification can help keep you out of the insect’s way while it does its beneficial work of ridding your garden of pesky insects.