Assassin Bugs: A Natural Predator In Your Garden 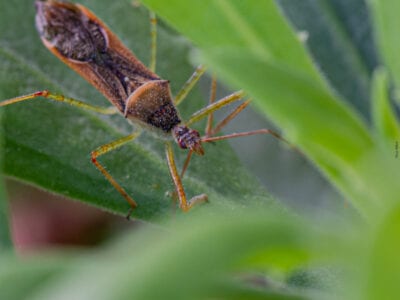 Assassin bugs (Zelus renardii) are beneficial insects that should be encouraged in your garden. There are around 150 species of assassin bugs in North America, most of which perform a service to the gardener and farmer. The insects prey on insect eggs, leafhoppers, aphids, larvae, boll weevils and others. The assassin bug is found in crop fields but is also a common insect in the home landscape.

Assassin bugs are 1/2 to 2 inches (1.3 to 5 cm.) long and have a curved mouth part that looks like a scimitar. They may be brown, tan, red, blackish yellow and often bi-colored. The curved mouth part acts as a siphon. After the bug catches its prey in its spiny or sticky front legs, it will stick the mouth part into the insect and suck out its liquids. The largest of the species, the wheel bug (Arilus cristatus), has a cog-shaped dome on its back that resembles a ship’s wheel.

The assassin bug female lays eggs several times during the warm season. The eggs are oval and brown and are usually attached to the underside of a leaf. The larva are similar in appearance to the adults and have the same long body. They do not have wings and must go through four to seven instars or growth periods before they are adults. This takes approximately two months and then the cycle starts anew. The nymphs are prey to birds, large arthropods and rodents. The assassin bug adults overwinter in leaves, bark and debris.

Assassin bugs are found in weedy or bushy cover during the warm summer months. They may be in wildflowers, especially goldenrod, towards fall. They are also common in woodland areas, hedges and along roads, fences and trails. The insects move slowly and are easy to spot.

As mentioned, assassin bugs are wonderful beneficial insects to have in your garden. They will hunt down and eat many of the harmful bugs that are frequently found in the garden, which reduces the need for manual or chemical pest control. Unlike praying mantis or ladybugs, assassin bugs are not sold at garden centers for pest control, but understanding their benefits and knowing what they are able to do for you can prevent you from accidentally mistaking this helpful bug as a threat to your garden.

As beneficial as they are in the garden, assassin bugs will bite if handled or disturbed. Their bite is not considered threatening, but it can be painful. The bite remains painful and swells and itches for a period afterward, much like a bee sting or a mosquito. It injects a toxin that some people are allergic to. Any excessive pain or swelling should be reported to your doctor.

NOTE: While they belong to the same family and are commonly confused with one another, the beneficial assassin bugs in this article are NOT the same as kissing bugs (also called assassin bugs), which carry Chagas disease.