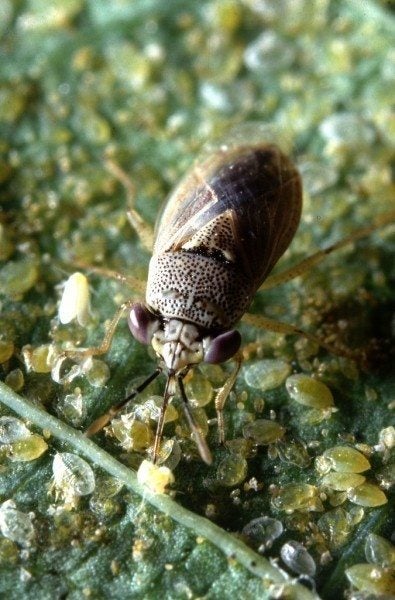 Big eyed bugs are beneficial insects found across the United States and Canada. What are big eyed bugs? In addition to their characteristic ocular orbs, these bugs have an important purpose. The insects feed on many varieties of insect pests that cause crop, turf, and ornamental damage. Big eyed bug identification is important, so you don’t confuse them with a variety of these pest insects.

What are Big Eyed Bugs?

The best time to spot these tiny bugs is in the morning or evening when dew still clings to leaves and blades of grass. The insect only gets about 1/16 to ¼ inch long (1.5-6 mm.) and has wide, almost triangular, heads and huge eyes that turn slightly backwards.

The big-eyed bug life cycle starts with eggs that overwinter. The nymphs go through several instars before becoming adults. These adult insects have an appearance of a wasp mixed with a beetle mixed with a fly.

How are Big Eyed Bugs Beneficial?

So how do these insects benefit the garden? They eat a variety of pests that include:

For the most part, big eyed bugs in gardens are a benevolent presence and will aid the gardener in combating all the pest insects. Even the young insects eat their share of the bad insects threatening your plants. Unfortunately, when prey is low, the big-eyed bug will resort to sucking sap and munching your plant parts. As luck would have it, the average organic garden has plenty of options for the insect’s breakfast, lunch, and dinner.

The most obvious feature on the big-eyed bugs is the bulging orbs at the top of their heads, which tend to tilt backwards. Big eyed bug identification is important to distinguish between this beneficial insect and the pesky chinch bug. This avoids widespread spraying that might kill one of your best chances at integrated and non-toxic pest management.

Preserving big eyed bugs in gardens requires knowledge of what the five instar, or nymph stages, look like. The instars last only four to six days and the nymph changes in each phase of its development. Nymphs are predators too, and their appearance mimics the adult, except they are wingless, smaller, and have darker spots and coloring. Adult big-eyed bugs only live about a month and a female can lay up to 300 eggs.