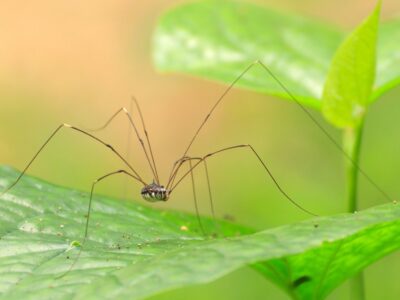 From science fiction to urban legends, many myths surround daddy-longlegs. These spider-like creatures often inhabit our gardens. With their oval bodies and long legs, they can look quite scary. But are daddy longlegs venomous? Should we ignore them, eliminate them, or encourage them to hang out in our gardens? Let’s find out.

Fear of spiders is one of the most common phobias in the United States. Anywhere from 3 to 15% of the American population is estimated to have arachnophobia. But are daddy longlegs spiders? While they do have eight legs and belong to the arachnid subclass, they are part of the Opiliones order and are not considered true spiders.

In the past, other myths have also surrounded this long-legged creature. Did you know it was once believed that daddy longlegs could locate cattle? Supposedly, if you picked it up by 7 of its 8 legs, the remaining leg would point toward the cattle. Another myth states that if you killed one of these invertebrates, it would rain the next day.

Are Harvestmen Good or Bad for the Garden?

Now that we know harvestmen are not spiders, don’t have venom and can’t hurt us, it’s time to consider whether these invertebrates are beneficial to the garden. We generally consider invertebrates beneficial if they pollinate flowers, consume garden pests or perform sanitation duties.

What Do Daddy Longlegs Eat?

Harvestmen are both carnivorous and scavengers. They’re known to feed upon a wide variety of food, including pollen, decomposing vegetative matter, fungi and bird droppings. Daddy longlegs also consume dead insects, but are opportunistic predators and will eat live prey when they can catch it.

Daddy longlegs are night feeders and come out of hiding at twilight to forage. When hunting, they sit motionless on the top of leaves and wait for unsuspecting prey. They do not have fangs, like true spiders. Instead, they have specialized mouthparts that are capable of holding prey while they eat.

Harvestmen will catch and consume most types of soft-bodied invertebrates, including some beneficial critters like earthworms. However, daddy longlegs are considered beneficial as they clean up decaying matter and hunt a wide variety of plant pests. Here’s a list of the many harmful bugs included in the daddy longleg’s diet:

Now that we know harvestmen are beneficial, let’s consider how to attract and protect them. Most notably, daddy longlegs are prone to dehydration and predation. Providing plenty of hiding places, such as rock piles, mulch and logs will keep them safe during the day so they can happily hunt garden pests at night.