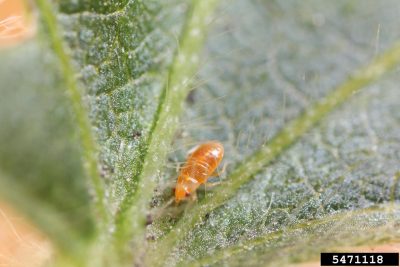 With a name like pirate bugs, these insects sound like they would be dangerous in the garden, and they are – to other bugs. These bugs are tiny, about 1/20 inches (0.125 cm.) long, and the minute pirate bug nymphs are even smaller. Pirate bugs in gardens are a gift, since the tiny insects eat bugs you’d rather not have around like:

Here are some tips about creating pirate bug habitats to attract these garden helpers.

Pirate bugs in gardens may be tiny, but their populations can grow fast in good conditions. To set up appropriate pirate bug habitats, you need to understand the pirate bug life cycle.

A female lives for about four weeks and, during that time, she can lay up to 100 eggs if she has enough food. The egg production decreases in cool weather.

Minute pirate bug nymphs hatch, developing through five instars before becoming an adult. Young pirate bugs are yellow, but they mature into brown in later nymph stages. The adult stage is characterized by the presence of brownish wings.

Planting a variety of nectar-rich plants is a great way to encourage these beneficial insects to visit your garden and, hopefully, remain there. Some of their favorites include:

Keeping plenty of these and other flowering plants around the garden should entice pirate bugs. Keep an eye out for their eggs, checking carefully beneath the foliage of their favorite plants. You may even be lucky enough to spot some of their larvae nearby feasting on those dread insect pests, which means they’re already doing their job!