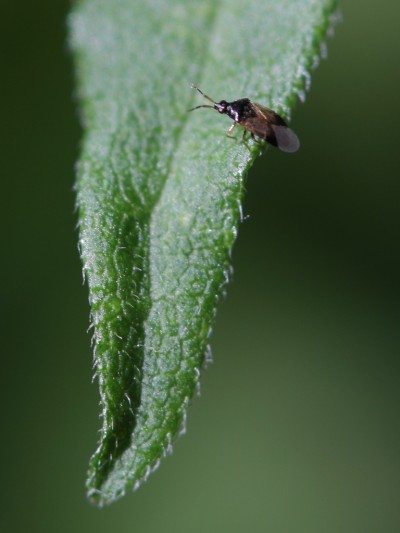 Many gardeners think that when they see bugs in the garden it’s a bad thing, but the truth of the matter is that a few bugs are not going to hurt your garden. It is best if there is a balance between harmful insects and beneficial garden bugs. After all, if there are no bad bugs for the good bugs to eat, they’re not going to stay around for long, which means your garden won’t benefit from their presence.

Often the first beneficial insects to appear in spring, minute pirate bugs (Orius spp.) are a welcome sight to gardeners who know that they make the battle against pest insects much easier. As their name implies, these are very small insects. You may never know they are hard at work in your garden unless you carefully examine your plants. By doing what you can to attract these beneficial garden bugs, you are limiting the need to use dangerous pesticides around your plants.

What are Pirate Bugs?

Minute pirate bugs are tiny insects that are usually less than one-fifth inch (5 mm.) long. They are black or dark purple with white markings at the tips of their wings so that they appear to have white bands when the wings are closed. Nymphs are generally between a yellow-orange and brown color and shaped like a teardrop.

Although incredibly small, pirate bugs move fast and are very predatory. Pirate bugs in the garden feed on a number of small insects, including aphids, spider mites, and thrips. They are also used to kill thrips in greenhouses. Each adult pirate bug can consume as many as 20 thrip larvae each day.

A beneficial pirate bug feeds by inserting its mouthparts into its prey and sucking out the body fluids. Both the nymphs and the adults feed in this way. They sometimes feed on tender plants as well by sucking sap from the leaves, but the damage they leave behind is minimal. Occasionally they will nip a human, but the bite is only a temporary irritation.

The minute pirate bug’s life cycle is brief, lasting as little as three weeks from egg to adult. Adults overwinter in garden debris, such as leaf litter. They emerge in early spring and the females lay eggs inside leaf tissue. You won’t see the eggs since they are inside the leaves. The orange larvae that hatch from the eggs go through several stages, called instars, before becoming adults.

How to Attract Pirate Bugs in Gardens

Attracting pirate bugs takes a careful selection of the plants that you have in your garden. Planting nectar-rich, spring and summer flowering shrubs and ornamentals is a good way of attracting pirate bugs to the garden. Keep them around by avoiding the use of insecticides as much as possible. Pirate bugs are most commonly attracted to the following plants:

You also need to have “food” around for pirate bugs to eat. So what do pirate bugs eat? Pirate bugs like to eat most of the “bad bugs” in gardens. Both nymphs and adults will feed on:

When prey is not in the vicinity, minute pirate bugs will eat pollen as well as plant juices. However, if there’s not enough food around for them to stay satisfied, it is likely that they’ll pack up and go somewhere else. Therefore, if you are trying to keep your garden as safe as possible and free from dangerous pesticides, you will want to make certain that your pirate bugs don’t go anywhere!