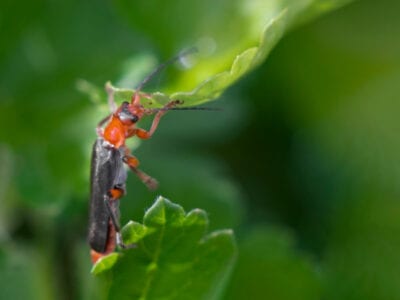 Soldier beetles look a lot like lightning bugs, but they don’t produce flickers of light. When you see them, you can be sure that you also have soldier beetle larvae. In gardens, the larvae live in the soil, so you won’t see them. As soon as soldier beetle eggs hatch, the predatory larvae begin feeding on the insect eggs and larvae of harmful insects.

Are Soldier Beetles Good or Bad?

Soldier beetles are your allies in the fight against harmful insects. They eat soft-bodied insects, such as caterpillars and aphids, while doing no harm to garden plants. They may take a sip of nectar or nibble at pollen, but they never chew leaves, flowers, or fruit. In fact, they help pollinate garden flowers as they travel from plant to plant.

While the beetles attack insects above the ground, their larva consumes the eggs and larva of garden pests below the ground.

The beetles do no harm inside the home either, but they can become a nuisance. You can try to keep them from entering by using caulking and weather stripping, but insecticides won’t help keep them out. If they manage to get inside, just sweep them up and discard them (or place them in the garden).

Soldier beetles overwinter in the soil as pupae. In early spring, the adults emerge and mate only once. The female then lays her eggs in the soil.

When the larvae hatch, they remain in the soil where they feed on the eggs and larvae of harmful insect pests. Soldier beetle larvae are important predators of grasshopper eggs, and help to keep these destructive garden pests under control.

The beetles get their name from the brightly colored, cloth-like wings that cover their bodies. The colored pattern might remind you of military uniforms. Colors vary and include yellow, black, red, and brown. The beetles are elongated and about one-half inch (1.25 cm.) long.

Soldier beetle larvae are slender and worm-like. They are dark in color and have an abundance of tiny bristles that give them a velvety appearance. The indentations between the body segments make them look wavy.