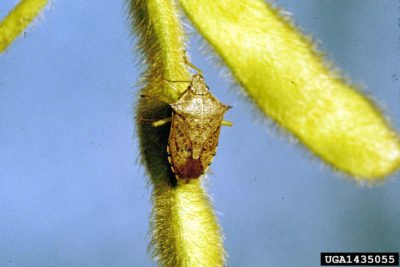 You may shudder to hear that spined soldier bugs (a type of stink bug) live in gardens around your home. This is actually great news though, not bad. These predators are more effective than you are at reducing pests on your plants. These predator stink bugs are among the most common in the United States, as well as Mexico and Canada. Read on for more spined soldier bug information.

What are Spined Soldier Bugs?

The life-cycle of these predator stink bugs starts when they are eggs. Females lay between 17 and 70 eggs at a time. The eggs hatch in a week or less into “instars,” the term used for this bug’s five immature stages. At this first stage, the instars are red and eat nothing at all. The color pattern changes as they mature.

They do eat other insects in the other four instar stages. It takes about a month for a newly hatched instar to develop into a mature adult. Adults overwinter in leaf litter to emerge again in early spring. Females lay some 500 eggs, beginning a week after they emerge.

Spined soldier bugs are generalist predators. They chow down over 50 different kinds of insects, including the larvae of both beetles and moths. These predator stink bugs have piercing-sucking mouthparts that they use to grab prey and eat them.

Are spined soldier bugs beneficial to gardeners? Yes, they are. They are one of the best predator bugs for reducing pest populations in crops, especially fruit crops, alfalfa, and soybeans.

While spined soldier bugs in gardens may occasionally suck on your plants in order to get a “drink,” this doesn’t harm the plant. Even better, they do not transmit disease.