Stag Beetle Facts – Benefits Of Stag Beetles In The Garden 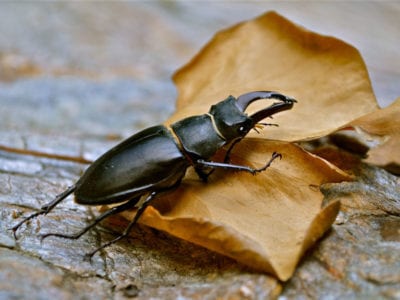 If you have ever seen a stag beetle, you would remember it. These are large insects with rather threatening-looking mandibles. In reality, they pose no threat to humans or pets, but they can be aggressive to each other during mating season. Did I also mention that they are big? Think something along the lines of several inches (7.5 cm.) in length at their largest. These are friendly insects, however, that do the gardener many favors.

Some of the largest beetles in this family look like something out of a sci-fi movie. However, they are generous giants with just two things on their minds. One is mating and the other is eating rotten vegetation. Let’s take a closer look at stag beetle facts to understand their place in the landscape.

There are more than 85 different species of stag beetles that range across the globe. Some are less than a fraction of an inch (1 cm.) and others grow up to 2 ¼ inches (6 cm.). These aren’t the heavyweight champions of the beetle world, but the males are unmistakable with their ferocious-looking jaws.

They use these to battle each other during mating season or if another male walks into their territory. The mandibles are the main stag beetle identification clue. Females are a bit smaller and don’t have huge mandibles. Colors range from black to brown and even a few species with oil-like rainbow hues.

Are Stag Beetles Good for Gardens?

The benefits of stag beetle habitats near garden areas are astounding. Stag beetle habitats lean towards woodsy areas but can also be found in your wood pile, compost bin, rotting outdoor structure, garbage bin, and any place it can find shelter and food. Its main food is vegetation that is rotting.

Adults may come out at night and hang out near your porch light. The larvae stay hidden in rotting wood stumps and the like. The damper and more rotten the wood, the more the amorous adults like the space.

One benefit of stag beetles is the larval feeding behavior on old wood and the adult’s menu, which includes rotten vegetation that helps clean up the yard.

Males locate a nice moist, rotten stump and guard it while they wait for likely females. They joust with competing males to ensure their territory. Stag beetles will often be found in colonies underground near rotting tree roots or in stumps, although each male will stake out his own turf.

Males mate with several females who lay eggs in the stump. The eggs have a short-term food supply, but larvae eat that up quickly and hatch soon after. The larvae are large and will feed on the wood for several years until they pupate for seven to nine months and finally emerge as adults. Adults only live a few weeks or until they have mated.