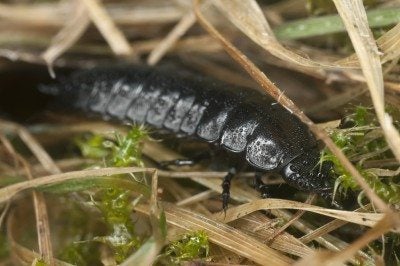 Most of us have encountered ground beetles in gardens. You turn over a rock or garden debris and a shiny black beetle goes racing for cover. You may even notice a sudden foul scent as it rushes off, secreting an oil in its wake to deter predators. While the sudden discovery of a scurrying ground beetle may be a little unnerving, it is actually a valuable ally to the gardener. Read on to learn more about the ground beetle life cycle.

Ground beetles are members of the Carabid family. While there are about 2,000 different species of ground beetles in North America, most of the ones we encounter in the garden are nocturnal. These beneficial ground beetles help reduce the need for chemical pest control by eating common garden pests like:

A few species of ground beetles will also eat the seeds of invasive weeds such as lambsquarter, foxtail, ragweed, and thistle.

The most common ground beetles in gardens are black or dark brown, have long legs that allow them to run very fast, and have vertical ridges down their backs. They can range in size from 1/8 inch to 1 inch (0.5 to 2.5 cm.). These ground beetles live on the soil surface, hiding underneath rocks, logs, mulch, and other garden debris during the day. They can live up to four years, overwintering beneath the soil.

How to Find Ground Beetle Eggs and Larvae

The ground beetle life cycle has four stages of metamorphosis – egg, larvae, pupa, and adult. Adult ground beetles lay about one generation of eggs per year. After mating, the female will lay 30-600 eggs on the soil, on leaves, or within the soil or mulch. Ground beetle eggs are small, white, and oval-shaped. In only about a week, ground beetle larvae will hatch from these eggs.

Ground beetle larvae look somewhat like garden centipedes with long black or brown segmented bodies. However, they only have six legs and have small pinchers on their heads. They stay mostly under the surface of the soil where they are great predators, preying on soil-dwelling garden pests.

When they have consumed enough food, they go into their pupa phase, later emerging as adult ground beetles. Much of the ground beetle’s life cycle coincides with the timing of its preferred prey. For example, ground beetles that mainly eat weed seeds will become adults just as these seeds are ripening and falling from the plants.

In the first three stages of their life cycle, they are at their most vulnerable. Many ground beetle eggs, larvae, and pupa are killed by mowing, tilling, and chemical pesticides. As adults, they have a better chance of escaping these dangers. Finding the small and well-hidden ground beetle eggs and larvae can be difficult, but it’s easier to invite the adults into your garden.

To attract these beneficial beetles to your garden, you can create a simple beetle refuge. Build a small raised garden bed at least two feet (0.5 m.) wide and four feet (1 m.) long. Plant native perennials and grasses in this bed and give it a good layer of mulch. Add some large rocks or logs for décor and ground beetle hideouts.

Maintenance of this beetle refuge should be a breeze. Let debris build up enough to encourage ground beetle eggs, but not too much to snuff out the plants. Do not mow, till, or spray pesticides in this area. In just a short time, you can enjoy the benefits of ground beetles in the garden.