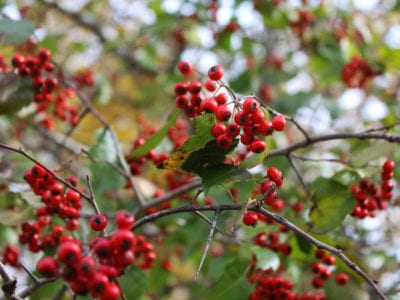 Growing deciduous shrubs in upper Midwest regions successfully depends largely on selecting the right species and varieties. With long and bitterly cold winters, hot summers, and fluctuations between wet and dry native species adapted to these conditions are best. There are other, non-native shrubs that will also work in the region.

The states of the eastern and central Midwest include USDA zones that range from 2 in northern Minnesota to 6 in southeast Michigan. Summers are hot everywhere in this region and winters are very cold. Most parts of these states are wet, but summers can get dry.

East North Central shrubs need to be able to withstand these climatic conditions but can also benefit from some very rich soils. In addition to tolerating cold and big temperature differences, deciduous shrubs here must survive snowstorms.

There are plenty of options for deciduous shrubs native to the upper and eastern Midwest. These are best suited to the region’s conditions. You may also choose varieties that are not native but from regions of the world with a similar climate. Options include:

Printer Friendly Version
Read more about East North Central
<PreviousNext>
Did you find this helpful? Share it with your friends!
FacebookTweetPinEmail
Related Articles
Newest Articles
You might also like…
Additional Help & Information