Chokecherry Planting Instructions: How To Use Chokecherries In The Landscape 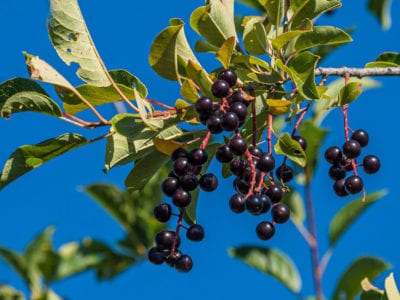 Chokecherry trees are commonly found in the foothills and mountain canyons, at elevation of 4,900 to 10,200 feet (1.5-610 km) and along streams or other damp areas. Let’s learn more about how to use chokecherries in the home landscape.

What is a Chokecherry?

So, what is a chokecherry? Growing chokecherry trees are large suckering shrubs (small trees) that are indigenous to the Southeastern United States but may be grown as a perennial landscape specimen elsewhere. Prunus viginiana can attain heights of up to 41 feet (12.5) tall with a canopy of 28 feet (8.5 m.) across; of course, this is extremely rare and generally the plant can be maintained to a size of about 12 feet (3.5 m.)  tall by 10 feet (3 m.)wide.

Chokecherry trees bear 3- to 6-inch (7.5-15 cm.) long creamy white blooms, which become dark red fleshy fruit, maturing into a mature purple black with a pit in the center. This fruit is used to make jams, jellies, syrups and wines. The bark has at times been used to flavor cough syrups. Native Americans utilized the bark extract as a cure for diarrhea. Fruit from growing chokecherry trees was added to pemmican and used to treat canker sores and cold sores. Leaves and twigs were steeped to create a tea to ease colds and rheumatism while the wood of the chokecherry was made into arrows, bows and pipe stems.

How to Use Chokecherry in the Landscape

Chokecherry is commonly used as a windbreak on farms, riparian plantings, and for highway beautification. Due to its suckering habitat (and potential toxicity), care should be take when determining where to plant chokecherries. In the garden landscape, chokecherry may be utilized as a screen or in mass plantings, being aware of its propensity for suckering and multiplying.

As a landscape planting, you can grow and harvest chokecherry fruit in the fall; the later the reaping, the sweeter the fruit. Remove the toxic stems and leaves when cleaning the berries and do not crush the seeds when cooking or juice extracting. Thus, common sense would tell you not to put the berries in the blender!

Chokecherry fruit is a rich source of dietary fiber with 68 percent of the daily recommended allowance, 37 percent DRA of vitamin K, and a terrific source of manganese, potassium and vitamin B6 with just 158 calories per half cup (118 ml.).

Chokecherry shrubs grow most abundantly in moist soils but are adaptable to a variety of soil mediums in the soil pH arena of 5.0 to 8.0. Cold hardy to USDA zone 2, wind resistant, moderately drought and shade tolerant, chokecherry planting instructions are pretty minimal as it is not particularly picky about where it is situated.

That said, in nature, growing chokeberry trees are often found near water sources and will, thus, be most lush with adequate irrigation while full sun also promotes fruiting.

In the wild, chokecherry is primarily noted for its role in providing habitat, as a valuable food source for wildlife and watershed protection. All parts of the growing chokecherry trees are eaten by large mammals such as bears, moose, coyotes, bighorn sheep, pronghorn, elk and deer. Birds munch on its fruit, and even domestic cattle and sheep browse on the chokecherry.

The leaves, stems and seeds contain a toxin, called hydrocyanic acid, which may rarely cause poisoning in domestic animals. Livestock must eat significant quantities of the toxic plant parts which do not normally occur except in times of drought/famine. Poisoning signs are distress, bluish tinge to the mouth, rapid breathing, salivation, muscle spasm, and finally coma and death.