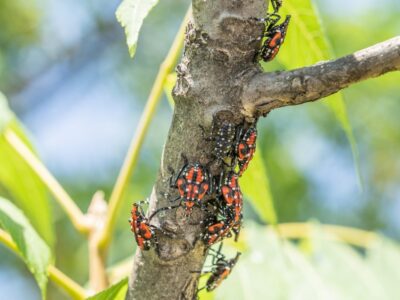 Californians are hardly all of one mind, yet the state has a unique identity, different from the other 49. It has more species of native plants than any other state – some 6,500 different species, subspecies and varieties, some of which only grow in the Golden State. Given this, it is no surprise that California also has its own common garden pests, a list quite different than found in the rest of the country.

Insects are pests that threaten both California’s natural environments as well as homes, gardens, and agriculture. While the list of common insects that trouble California gardeners contains pests that also frequent other states, there are a few unique pests that may not be as common elsewhere.

Both raccoons and opossums are considered garden pests by many in California, even in big cities like San Francisco. In more rural areas, deer leap over fences to munch grass and/or garden crops. And hungry black bears can be real pests in California orchards.

When it comes to insects in the garden, Californians face many of the bugs considered unwanted in vegetables and ornamentals in other states. The University of California Statewide IPM Program and the Department of Entomology at UC Davis gathered together gardeners from Los Angeles to Fresno to Napa County to inquire which California garden insects bothered them most.

Topping the list were aphids, those tiny, sap-sucking insects that seem to like to chow down on a very impressive quantity of California plants. Although aphids rarely put a plant’s life in danger, they are annoying, can cause other diseases, and are quite difficult to eradicate completely in a garden.

Second in the running is scale, pests of woody plants that look more like fish scales than insects, ants, and two other sap-sucking pests, whiteflies and thrips. Gardeners can use integrated pest management techniques to successfully control all of these pests without toxics.

Nevada Pests in the Garden

Top insect pests in Nevada are slightly different than those in California. They include hornworms — large, bright green caterpillars, one of the largest species of caterpillar in the west. They are the young of the sphinx moth that look a little like hummingbirds as they feed from deep blossoms.

Hornworms can munch through leaves, like tomato plant foliage, overnight. They feed for a month or so before migrating to the soil and pupating. They are harmless to humans, however, and can easily be picked off plants and removed.

Other much-hated garden pests in Nevada include sap-suckers like tiny spider mites and leaf miners. Tree-borers are dangerous, since they chew through the roots and barks of trees, devastating the tree. Viburnum beetles are considered a big problem in Nevada gardens as well, eating out big chunks of foliage. Sowbugs are an increasing problem as Nevada becomes hotter and drier. They love to eat soft fruits like berries as well as tender shoots.

Printer Friendly Version
Read more about West
<Previous
Did you find this helpful? Share it with your friends!
FacebookTweetPinEmail
Related Articles
Newest Articles
You might also like…
Additional Help & Information