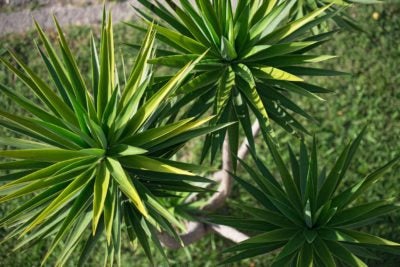 Did you know Yucca is closely related to asparagus? This spiky plant is native to the hot, dry regions of the Americas and is closely identified with desert regions. Are there cold hardy Yucca varieties? There are over 40 species of these rosette forming plants, with hardiness ranges across the map. If you do your homework, you can find a Yucca variety that will survive and thrive in even the coolest zones.

The slightly dangerous looking Yucca is a large group of sun-loving plants. There are tall specimens, such as Joshua tree, and ground hugging little plants, like Adam’s Needle. Most are found in regions with little rain, plenty of sunshine, and hot days. However, even desert temperatures can dip into freezing at night and these plants have developed remarkable adaptability to temperatures below zero.

Yuccas are stately, although spiky, plants that add desert elegance to any landscape or container. Yuccas for zone 5 must be able to withstand temperatures of -10 to -20 degrees F. (-23 to -29 C.) in winter. These are harsh temperatures for plants that hail from primarily sunny locations. Surprisingly, many species in the family are hardy to these temperatures and even lower.

Zone 5 Yucca plants must not only contend with cold temperatures but often thick snow and potentially damaging ice. Yucca leaves have a waxy coating that helps them conserve moisture in dry zones but also protects them from ice. That makes the foliage quite tolerant of winter cold and its attendant weather. Some die back may be experienced, but if the crown is kept alive, new leaves emerge in spring.

Varieties of Yuccas for Zone 5

Cold hardy Yucca varieties exist, but what are they?

One of the most cold hardy is Soapweed. The plant is also known as Great Plains Yucca or Beargrass and is so hardy it has been found growing in the snowy regions of the Rocky Mountains. It is considered adaptable to zone 3.

Banana Yucca is a medium sized plant with white flowers and broad leaves. It is variously reported as being hardy to zones 5 to 6. It should be planted where some protection is received in zone 5.

Beaked Yucca is native to Texas and one of the ornamental zone 5 Yucca plants.

Big Bend was developed as an ornamental and bred for its deeply blue foliage.

Adam’s Needle is another of the hardier Yucca plants. Some forms of this plant are even variegated.

Spanish Dagger and Dwarf Yucca round out the list of species to try in zone 5.

If a Yucca is considered marginally hardy, such as Banana Yucca, there are things you can do to enhance the plant’s survival during winter.

Using mulch around the root zone keeps the soil slightly warmer. Installing the plant in a microclimate in your garden, such as inside a wall or in an area where there are rocks to collect and conserve heat, can be a method of tricking semi-hardy plants into thriving in cooler regions.

In extreme situations, covering the plant over night with a frost blanket or just some burlap is enough to keep out the most damaging cold and prevent ice crystals from harming the leaves. Another way to protect Yucca is to container grow them and move the whole pot indoors for winter. That way you don’t have to worry that temperatures will reach a damaging level and harm your beautiful plant.