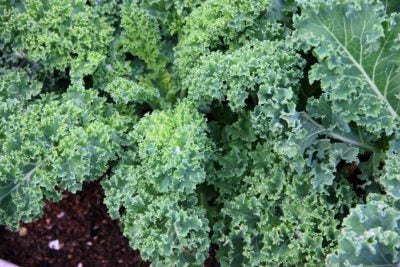 Remember a few years back when kale, like cabbage, was one of the least expensive items in the produce department? Well, kale has exploded in popularity and, as they say, when demand goes up, so does the price. I’m not saying it isn’t worth it, but kale is easy to grow and can be grown in several USDA zones. Take zone 8, for instance. What zone 8 kale varieties are there? Read on to learn how to grow kale in zone 8 and other helpful information regarding kale plants for zone 8.

Kale has been getting a lot of attention in the last few years due to the high amounts of vitamins and minerals it contains. Packed with vitamin A, K, and C, along with a good percentage of daily recommended minerals, it’s no wonder that kale is categorized as one of the super foods.

The type of kale most commonly found at the grocers is grown for its ability to withstand handling, transport, and display time, not necessarily for its flavor. Kale comes in all different sizes, shapes, colors, and textures, so with a little experimentation, you should be able to find at least one kale suited for zone 8 that will suit your taste buds as well.

Kale is a fast-growing green that thrives in cool temperatures and some varieties even become sweeter with frost. In fact, in some areas of zone 8 (such as the Pacific Northwest), kale will continue to grow from fall through winter and into spring.

How to Grow Kale in Zone 8

Set out kale plants in the spring about three to five weeks before the last frost and/or again six to eight weeks before the first frost in the fall. In USDA zones eight to ten, kale can be continually planted throughout the fall. Fall is the best time to plant kale in regions where winter temperatures don’t dip below the teens, or kale can be grown in a cold frame in northern climates.

Set plants out in full sun to partial shade. The less sun (less than six hours per day), the smaller the leaves and stock. To produce those tender leaves, kale should be planted in fertile soil. If your soil is less than fertile, amend it with nitrogen rich components like blood meal, cottonseed meal, or composted manure.

Set kale plants 18 to 24 inches (45.5-61 cm.) apart. If you want big leaves, give the plants more space, but if you desire small, tender leaves, plant the kale closer together. Keep the plants irrigated with 1 to 2 inches (2.5-5 cm.) of water per week. To keep roots cool, retain moisture, and retard weeds, mulch around the plants with compost or fine bark, pine needles, straw, or hay.

The type of kale found in the supermarket is curly kale, named, of course, for its curled leaves that range from light green to purple. It is a bit on the bitter side, so harvest young leaves if possible. There are several varieties of curly kale, including the extra curly Scottish ‘bor’ series:

Lacinato kale, also known as dinosaur kale, black kale, Tuscan kale, or cavolo nero, has rippled, deep blue/green leaves that are long and spear-like. The flavor of this kale is deeper and earthier than that of curly kale, with a hint of nutty sweetness.

Red Russian kale is a reddish purple color and has a mild, sweet flavor. It is very cold hardy. Red Russian kale leaves are flat, somewhat like the mature leaves of oak or arugula. As the name suggests, it hails from Siberia and was brought to Canada by Russian traders around 1885.

The type of kale you plant in your zone 8 garden really depends on your palate, but any of the above will grow easily and with minimal maintenance. There are also ornamental kale varieties that while edible, tend to be tougher and not as flavorful, but will look lovely in containers or the garden proper.