What Is Clubroot: Learn About Clubroot Treatment And Control 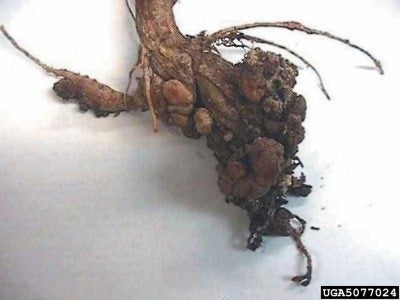 What is clubroot? This difficult root disease was initially thought to be caused by a soilborne fungus but has since been found to be the result of plasmodiophorids, obligate parasites that spread as structures called resting spores.

Clubroot is particularly nasty because it can remain in the soil for as long as seven to ten years, making the area unfit for growing susceptible plants.

The primary symptoms of clubroot include enlarged, deformed, club-shaped roots and stunted growth. Eventually, the swollen roots turn black and develop a rotten aroma. In some cases, the disease may cause wilted, yellowing or purple foliage, although the disease isn’t always apparent above the ground.

Clubroot is extremely difficult to manage and the best way to control its spread is to rotate crops, which means not planting cruciferous plants in the same area more than once every three or four years.

Clubroot thrives in acidic soil, so raising the pH to at least 7.2 may be one of the most effective means of attaining clubroot control. Ohio State University Extension advises that calcitic lime is the best way to raise the pH, unless your soil is low in magnesium. In this case, dolomitic lime may be more effective.

If possible, lime the soil at least six weeks before planting time. Be careful not to raise the pH too high, as highly alkaline soil may affect the growth of non-cruciferous plants.

To prevent transmission of spores to uninfected areas, be sure to clean and disinfect garden tools and machinery after working in infected soil. Never invite trouble by moving infected plants or contaminated soil from one planting area to another (including the mud on the soles of your shoes). Take necessary steps to prevent soil run-off during rainfall.

While certain fungicides were believed to offer some help in reducing development of clubroot disease, there are no chemicals approved for clubroot treatment. Your local Cooperative Extension Office can offer advice for your specific situation.

Care for Plants with Clubroot

If your garden soil is affected with clubroot, the only recourse is to pull and discard plants as soon as possible, as aggressive action is the only way to discourage spread of the disease. Dig around the plant and remove the entire root system to prevent the roots from breaking up and spreading the disease. Discard the plants properly and never put them on your compost pile.

Next year, consider starting your own cruciferous plants from seed, using a sterile commercial potting soil. This is the best way to ensure you aren’t introducing the disease from an outside source. If you purchase seedlings, be sure to buy only plants that are guaranteed to be clubroot-free. Once again, be sure to rotate crops regularly.