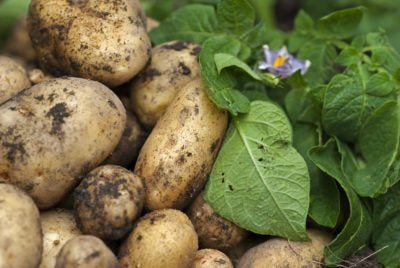 Ah, spuds. Who doesn’t love these versatile root vegetables? Potatoes are hardy in most USDA zones, but the planting time varies. In zone 8, you can plant taters very early, provided there are no expected freezes. In fact, potato varieties for zone 8 prefer a cool spring and plenty of moisture. Try growing potatoes in zone 8 in buckets or garbage cans for easy harvest. They are also easy to start in well prepared ground.

Potatoes have been cultivated for over 2,000 years. There are somewhere between 2,000 and 3,000 cultivars of these Bolivian tubers. They are related to eggplants and tomatoes and have the same potential toxins in their leaves and flowers. The tubers are the only edible part of the plant. The delicious spuds have innumerable uses and preparation methods. Such a versatile food is perfect for zone 8.

Potatoes prefer cooler soils. At temperatures above 75 degrees F. (24 C.), tuber production slows and when temps reach 85 degrees F. (30 C.), it basically stops. That is why it is important to plant potatoes early in the season when soil is still cool. Potatoes need at least 100 to 120 days for adequate production. Zone 8 potato growing usually commences in early spring, but you can also plant in midsummer for a fall crop.

Potatoes will produce more tubers in nice, loose sand or silt. If your soil is heavy or has deep clay components, lighten it with compost and some organic grit. Hilling is the best way of growing potatoes in zone 8 and elsewhere. Potatoes are planted fairly shallow in trenches and then soil is added as they sprout.

This helps prevent greening, a process that leaves potatoes slightly toxic. Overtime, zone 8 potato plants will be allowed to emerge and leaf. Hilling also gives potatoes the opportunity to produce more levels of roots from which the tubers grow, increasing the harvest.

Potatoes are planted from portions of the tuber. Seeds are produced but rarely develop into plants with tubers like the parent. Seeds also take a long time to produce edible tubers. The variety of potato planted is really up to the gardener and will depend upon your preference.

There are spuds that are moist, waxy, or dry. There are also red, yellow, purple, and white tubers. You may want a heavy skinned potato, like a Russet, or small, easy-to-roast tubers such as a fingerling cultivar. Some good zone 8 potato plants might be:

Planting and Care for Zone 8 Potatoes

Divide spuds into sections with a clean knife. Include one or two healthy eyes in each piece. Set cut side down in furrows 3 to 5 inches (8-13 cm.) under soil. Place pieces 8 to 10 inches apart (20-25 cm.). You can also grow potatoes on the top of soil covered with straw mulch. This makes it easier to harvest the potatoes as needed. You can continue to replace the mulch and grow more potatoes until the vines die.

Potatoes need consistent water once flowers form. They will be making tubers at this point and need supplemental moisture. The most common problems stem from alternating wet and dry conditions, early blight, late scab, several kinds of rot and root nematode damage. Watch for insect pests and plant decoy crops or combat with Neem oil.

In most cases, care for zone 8 potatoes is minimal. These prolific plants can almost grow themselves and will reward even the most minimal garden practitioner with a healthy crop of tubers.