Zone 8 Shade Vines: What Are Some Shade Tolerant Vines For Zone 8 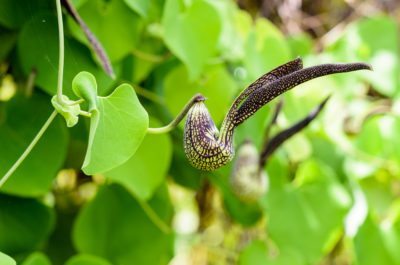 Vines in the garden serve a lot of useful purposes, such as shading and screening. They grow fast and most flower or even produce fruit. If you don’t have a lot of sun in your garden, you can still enjoy growing vines in the shade; you just need to know which plants will work best.

Vines are popular in all zones because they grow quickly to cover things you don’t want to see, like that big air conditioning unit, but also because they soften lines, add pretty, colorful flowers, and foliage, and some even turn color in the fall. Vines are also great for small spaces, adding foliage and flowers in the vertical space.

Although zone 8 is a climate in which many different plants thrive, shade can be tricky. A lot of vining plants love the sun, but there are some choices you can pick that will tolerate shade during warm growing seasons:

Claradendrum. Also known as bleeding heart, this vine loves shade and produces its namesake, heart-shaped white flowers with a drop of red. The vine is easy to train on a support but will also grow along the ground.

Clematis. The clematis vine produces pretty flowers and while many varieties require full sun, there are a couple that thrive in the shade: sweet autumn clematis, which grows fast and produces white flowers, and alpine clematis.

California pipevine. You can’t go wrong with pipevines in the landscape. This particular vine is native to California and will grow quickly and produce an abundance of small, purple flowers even in nearly full shade.

Chocolate vine. Also known as five leaf akebia, this is an easy vine to grow because it tolerates a variety of conditions, including sun or shade, dry or most soil. It smells like vanilla and produces pretty, mauve-colored flowers.

English ivy. Ivy will give you slower-growing coverage but is a great choice for shade and to cover walls, especially brick. There are no flowers, but you do get a rich, deep green year after year with ivy.

Most zone 8 vines for shade prefer moist soil that is well drained and will need to be pruned regularly to prevent them from taking over your garden. Tend your shade vines well and they will give you coverage, greenery, and add a beautiful vertical dimension to your space.