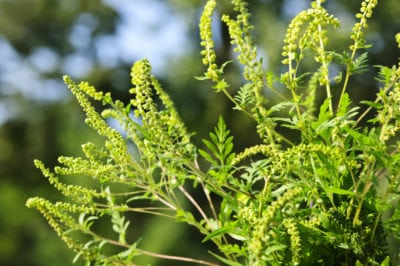 I love the sights, sounds and smells of fall – it’s one of my favorite seasons. The taste of apple cider and doughnuts as well as grapes harvested fresh from the vine. The scent of pumpkin scented candles. The sound of rustling leaves…the…the…Ahchoo! *sniffle sniffle* *cough cough* Sorry about that, don’t mind me, just my allergies kicking in, which are my least favorite part about fall.

If you, like me, are one of the 40 million Americans who suffer from seasonal allergies, then it’s helpful to know what the triggers for your allergies are so you have something to blame for the miserable sneezing and coughing fits that follow, and hopefully avoid. So, what are some plants that cause fall allergies? Read on to learn more about allergies in autumn. Ah-Ah-Ahchoo!

About Pollen in the Fall

Pollen, the common trigger of our seasonal allergies, originates from different sources depending on the time of year. In the spring, it’s released by the trees. In the summer, it’s brought forth by grasses. Pollen in the fall (and late summer) is strewn by weeds. The onset and duration of each of these three pollination phases (trees, grasses, and weeds) largely depends on where you are located in the United States or abroad.

Unfortunately, avoiding fall allergy plants will be difficult, if not impossible, if you spend any modicum of time outdoors.

Ragweed is the biggest allergy trigger in the fall, causing 75% of hayfever issues. This weed, which grows in the South, North and Midwest U.S., is a prolific pollen producer: The greenish-yellow flowers on just one ragweed plant can produce up to 1 billion pollen grains, which can travel up to 700 miles by wind. Unfortunately, goldenrod is often blamed for allergies triggered by ragweed, which blooms at the same time and looks similar.

While ragweed is the most responsible for allergies in autumn, there are many other plants that cause fall allergies, some of which are mentioned below:

Sheep’s sorrel (Rumex acetosella) is a common, perennial weed with a distinctive clump of green, arrowhead-shaped leaves that are reminiscent of a fleur-de-lis. Above the basal rosette of leaves, tiny red or yellow flowers appear on erect stems that branch off near the top. Plants that produce the yellow flowers (the male flowers) are the heavy pollen producers.

Curly dock (Rumex crispus) is a perennial weed (occasionally grown as an herb in some gardens) with a rosette of basal leaves that are lance-shaped and characteristically wavy or curly. This plant will send up elongated stalks, which branch off near the top and produce clusters of flowers (small, greenish sepals) that turn reddish-brown and seed at maturity.

Lambsquarter (Chenopodium album) is an annual weed with a dusty white coating. It has broad, toothy-edged, diamond or triangular shaped basal leaves which are likened to the webbed feet of geese. The leaves near the top of the flower stalks, in contrast, are smoother, narrower, and elongated. The flowers and seed pods resemble greenish-white balls, which are packed in dense panicles at the tips of the main stems and branches.

Pigweed (Amaranthus retroflexus) is an annual weed with diamond-shaped leaves oppositely arranged along a tall stem. Small, green flowers are densely packed into spiky flower clusters at the top of the plant with smaller spikes sprouting from the leaf axils below.

Autumn garden allergies are also attributed to the following:

One last note: Mold is another trigger of autumn garden allergies. Damp leaf piles are a known source of mold, so you will want to be sure to rake your leaves regularly.