Cocklebur Control – Tips For Getting Rid Of Cocklebur Weeds 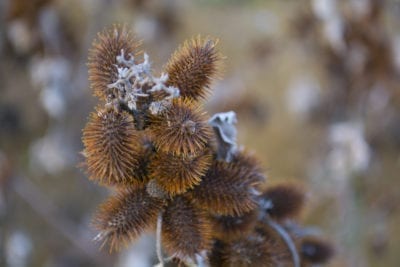 We’ve all probably experienced it at one point or another. You take a simple nature walk only to discover hundreds of sharp, little burrs stuck in your pants, socks, and shoes. A cycle in the washer won’t get them fully out and it takes an eternity to pick out each burr by hand. What’s even worse, though, is when your pets come in from playing outside covered with burrs matted in their fur. These nasty burrs from cocklebur are no doubt an intolerable nuisance. Read on to learn about controlling cocklebur weeds.

Cocklebur can be found anywhere – woodlands, pastures, open fields, along roadsides, in gardens, or landscapes. Because it is a native plant, vast efforts are not taken to eradicate it and it may even be a protected native species in some regions. However, it is listed as a noxious weed in the states of Oregon and Washington because of its damage to wool production and toxicity to livestock, especially calves, horses, and pigs. For humans, it can be a skin irritant.

How to Kill Cocklebur Weeds

Cocklebur weed management can be tricky. Of course, because of its toxicity to animals, it cannot be controlled by grazing, as many other weeds can be. There are, in fact, very few natural biological control methods for getting rid of cocklebur weeds.

The parasitic plant, dodder, may be effective in choking out cocklebur plants, but as this, too, is considered an unwanted landscape plant, it isn’t advisable. Studies have also shown that the Nupserha beetle, native to Pakistan, is effective in controlling cocklebur, but as it’s not a native species, you’ll likely not find the insect in your backyard.

The most effective methods of cocklebur control are hand pulling or chemical controls. Cocklebur plants reproduce easily by seed, which are generally dispersed on water. The seed can lie dormant in the soil for up to three years before ideal conditions cause it to germinate. Yanking out every small seedling as they appear is one option.

Chemical controls take less time. When using herbicides for controlling cocklebur, it is recommended that you use this only as a last resort. Organic approaches are safer and much more environmentally friendly.