Can Honey Be Poisonous: What Makes Honey Toxic 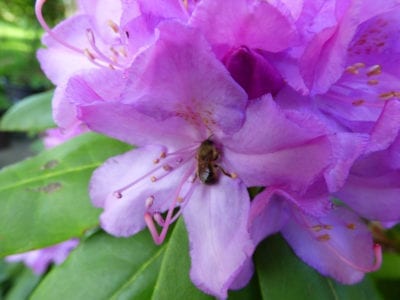 Can honey be poisonous, and what makes honey toxic to humans? Poisonous honey occurs when bees collect pollen or nectar from certain plants and carry it back to their hives. The plants, which contain chemicals known as grayanotoxins, aren’t typically poisonous to the bees, however, they are toxic to humans who eat the honey.

Don’t rush to give up on sweet, healthy honey just yet though. Chances are good that the honey you enjoy is fine. Let’s learn more about what makes honey toxic and toxic honey plants.

Can Honey Be Poisonous?

Poisonous honey is not something new. In ancient times, honey from toxic plants nearly destroyed armies fighting battles in the Black Sea region of the Mediterranean, including the armies of Pompey the Great.

Troops that ate the intoxicating honey became drunk and delirious. They spent a couple of unpleasant days suffering from vomiting and diarrhea. Although the effects aren’t usually life-threatening, some soldiers did die.

These days, honey from toxic plants is primarily a concern for travelers who have visited Turkey.

The rhododendron family of plants includes more than 700 species, but only a handful contain grayanotoxins: Rhododendron ponticum and Rhododendron luteum. Both are common in the rugged areas around the Black Sea.

Also known as calico bush, mountain laurel (Kalmia latifolia) is another toxic honey plant. It is native to the eastern United States. It was transported to Europe in the eighteenth century, where it is grown as an ornamental. Honey can be poisonous to people who eat too much.

Honey made from the above-mentioned plants usually isn’t toxic because the bees collect pollen and nectar from many different types of plants. Problems arise when bees have limited access to a wide variety of plants and collect honey and pollen primarily from these toxic plants.

If you’re concerned about honey from toxic plants, it’s best not to eat more than a spoonful of honey at one time. If the honey is fresh, that spoonful should be no more than a teaspoon.

Eating from toxic honey plants usually isn’t life-threatening, but the grayanotoxins may cause digestive distress for a couple of days. In some cases, reactions may include blurry vision, dizziness, and stinging of the mouth and throat. More rarely reactions include problems with the heart and lungs.