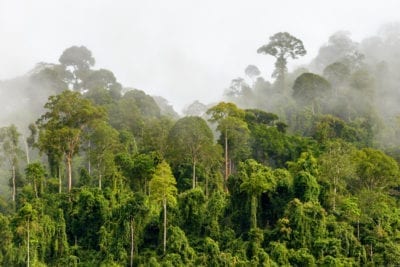 When you think about soil, your eyes probably drift down. Soil belongs in the ground, underfoot, right? Not necessarily. There’s a whole different class of soil that exists high above your head, up in the treetops. They’re called canopy soils, and they’re an odd but essential part of the forest ecosystem. Keep reading to learn more canopy soil info.

What are Canopy Soils?

A canopy is the name given to the space made up of the collected treetops in a dense forest. These canopies are home to some of the greatest biodiversity on earth, but they are also some of the least studied. While some elements of these canopies remain a mystery, there is one we’re actively learning more about: soil in trees that develops far above the ground.

Canopy soil isn’t found everywhere, but it has been documented in forests in North, Central, and South America, East Asia, and New Zealand. Canopy soil isn’t something to buy for your own garden – it’s an important part of the forest ecosystem that helps regulate temperature and moisture and spread nutrients. However, it is a fascinating quirk of nature that’s great to admire from afar.

What is in Canopy Soil?

Canopy soil comes from epiphytes – non-parasitic plants that grow on trees. When these plants die, they tend to decompose where they grew, breaking down into soil in the nooks and crannies of the tree. This soil, in turn, provides nutrients and water for other epiphytes that grow on the tree. It even feeds the tree itself, as often the tree will put out roots directly into its canopy soil.

Since the environment is different from that on the forest floor, canopy soil makeup isn’t quite the same as that of other soils. Canopy soils tend to have higher amounts of nitrogen and fiber, and are subject to more extreme changes in moisture and temperature. They also have distinct kinds of bacteria.

They are not completely separate, however, as heavy rainfalls will often wash these nutrients and organisms down to the forest floor, making the composition of the two kinds of soil more similar. They are an important part of the canopy ecosystem, serving an essential role that we are still learning about.