Beware The Ides Of March: A Weed, Flower And Tree Named For Caesar 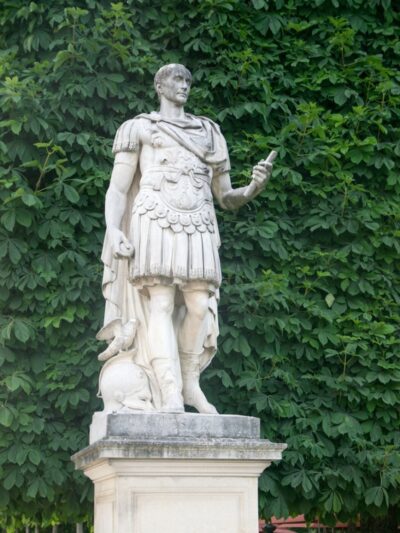 Julius Caesar has Shakespeare to thank for his fame, since many today are only familiar with the tale of betrayal through the play. But in his day, he was a masterful leader and conqueror. His renown has been sufficient for a variety of plants to be named in his honor. How many of them do you know?

Considering the role Caesar played in shaping the West, as the greatest general in the history of the Roman Republic, it isn’t surprising that a few plants were named for him.  After all, he had the seventh month of the year named after him too.

Though this is ancient history today, Caesar is remembered today because of the Shakespeare play Julius Caesar about how he was assassinated by Brutus on the Ides of March. This has resulted in a number of cultivars being given his name.

In the town of Lo, in the West Flanders region of Belgium, there stands a very old tree. It is so ancient that its exact age is in doubt, but it is said to be over 2,000 years old. Named Caesarsboom, which translates to Caesar’s Tree, it is a European Yew tree (Taxus baccata) and designated a national monument in Belgium.

The reason for the name and the fame is a long-held local legend. It is impossible to verify, and historians cast doubt on its truth, yet the townspeople believe that Julius Caesar rode through the town on his way to Britain in 55 BC. He is thought to have tied his horse to the tree.

Caesar’s weed (Urena lobata) is a member of the rosemallow family that hails from tropical regions in India, Asia, Africa, and South America. It was used in Europe as a fiber crop and introduced to the Caribbean region by European voyagers in the eighteenth century.

While the common name might refer to Julius Caesar, it is by no means certain. There were a number of Caesars in Rome. The plant has proven to be very invasive in this country, so a reference to the Augustus Caesar of Roman Empire fame seems more appropriate. (He did get a month named after him too).

There is a little primula with the cultivar name “Julius Caesar,” in obvious reference to the general. It is said to be one of the first to bloom, with large, claret colored flowers and red leaves. But the reason for honoring Julius Caesar is unknown.

In keeping with the tradition of naming rose cultivars after famous people, there are several roses named after Caesar. The Caesar/Caesar’s Rose, created by Dutch rose breeder Jan Van Veen in 1981, has small crimson blossoms that grow in clusters. The Climbing Rose Caesar might also be named after the Roman general. It has a pink inside with cream tones on the sides.

Another Caesar relative was honored with a cultivar of Siberian iris. Iris sibirica “Caesar’s Brother” offers dark purple flowers that rise above refined, slender, sword-like green foliage. Again, the reason for giving this honor to Caesar’s sibling is lost in the fogs of history.