Learn How Lightning And Plants Interact 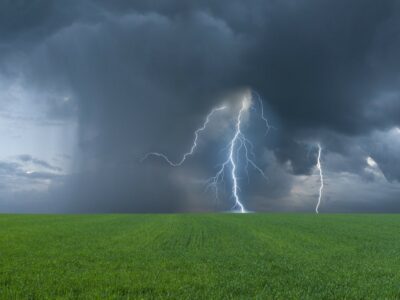 There’s no doubt thunderstorms can disrupt our gardening plans for the day. Nature’s light show can pop up suddenly and leave our gardens too wet and soggy for many of our outdoor chores. While these storms do bring welcome rains, there’s another perk of thunderstorms you may not realize. The nitrogen from lightning benefits plants.

How Does Lightning Help Plants

You may be surprised to learn that a whopping 16 million thunderstorms form around our planet each year. These storms generate approximately 44 lightning strikes each second. Lightning transforms the nitrogen in our atmosphere into a form which is usable to plant life.

Thinking back to your school days, you likely learned that the earth’s atmosphere is made up of 78 percent nitrogen. This gas is comprised of two strongly-bonded nitrogen atoms. Except for a few species of microorganisms, this nitrogen is largely unavailable to plant life.

This is where lightning comes into the picture. Each bolt of lightning dispels about 108 joules of energy. This is equivalent to the amount of electricity a modest sized house uses in three to six days.

Yet, a bolt of lightning only lasts about 100 millionth of a second. This creates a burst of energy strong enough to break the bonds which hold nitrogen gas (N2) molecules together. So, each time lightning strikes, nitrogen atoms are released. This process is called nitrogen fixation by lightning.

When nitrogen gas molecules are split apart by lightning, they quickly bond to oxygen atoms in the atmosphere to form nitrogen dioxide. This water-soluble compound dissolves in rain droplets to make nitric acid and reaches the ground as nitrates.

Lightning-split nitrogen atoms can also bond with hydrogen to form ammonia. Either way, rainwater containing these compounds seeps into the ground and the nitrogen is now in a form which plants can use.

As gardeners we know nitrogen is an essential nutrient for our growing plants. If lightning and plants are a beneficial combo though, why do we need to include this nutrient when we fertilize our crops?

The simple truth is lightning only provides a small amount of the nitrogen plants need for growth. Although scientists estimate that lightning produces 250,000 tons of nitrogen across the globe each year, this only amounts to somewhere between 1 and 50 pounds (454 g. to 23 kg.) per acre.

Additionally, strong storms can produce copious amounts of rainfall. This can push nutrients deeper into the soil and below the roots of many plants. Runoff from heavy rains can also carry nutrients away.

So, when we ask, “Is lightning good for plants?” the answer is yes. Since nitrogen is a key constituent of chlorophyll, you might even notice your plants turning greener after a storm.