Moving Plants Across State Lines: Can You Transport Plants Over State Borders 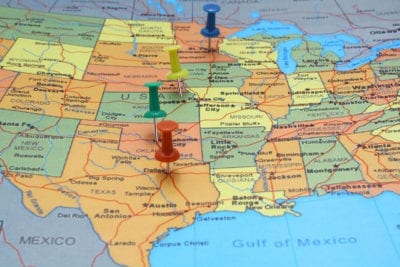 Are you planning a move out of state soon and planning on taking your beloved plants with you? Can you take plants across state lines? They’re houseplants, after all, so you figure no big deal, right? Depending on where you move to, you might be wrong. You may be surprised to learn there are actually laws and guidelines about moving plants out of state. Moving a plant from one state to another may require certification that the plant is free from pests, especially if you’re moving plants across state lines that rely heavily on commercial agriculture.

Can You Take Plants Across State Lines?

Usually, you can take houseplants when you move to different states without too much trouble. That said, there may be restrictions on exotic plants and any plants that have been cultivated outdoors.

When it comes to moving plants over state borders, don’t be surprised that there are state and federal regulations to adhere to, particularly when the destination state is one that relies primarily on crop revenue.

You may have heard of the gypsy moth, for instance. Introduced from Europe in 1869 by Etienne Trouvelot, the moths were intended to be interbred with silkworms to develop a silkworm industry. Instead, the moths were accidently released. Within ten years, the moths became invasive and without intervention spread at a rate of 13 miles (21 km.) per year.

Gypsy moths are just one example of an invasive pest. They are more commonly transported on firewood, but ornamental plants that have been outside may also contain eggs or larvae from insects that could be potential threats.

With regards to state lines and plants, each state has its own regulations. Some states only allow plants that have been grown and kept indoors while others require that the plants have fresh, sterile soil.

There are even states that require an inspection and/or certificate of inspection, possibly with a quarantine period. It is possible that if you are moving a plant from one state to another it will be confiscated. Some types of plants are outright banned from certain areas.

To safely transport plants over state borders, it is highly advised that you check with the USDA for their recommendations. It’s also a good idea to check with the Departments of Agriculture or Natural Resources for each state you are driving through.