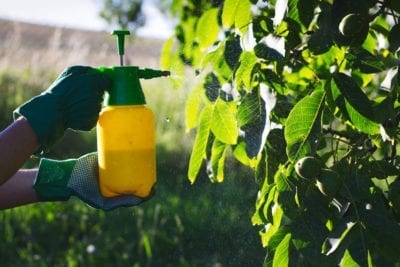 Fungicides are a very useful item in the gardener’s arsenal, and when used correctly, they can be extremely effective in the fight against disease. They can also be a little mystifying, and if used incorrectly can yield some pretty disappointing results. Before you start spraying, one important distinction to understand is the difference between protectant and eradicant fungicides. Keep reading to learn more.

What is a Protectant Fungicide?

Protectant fungicides are sometimes also called preventative fungicides. Like the name suggests, these are meant to be applied before a fungus takes hold, as they create a protective barrier that stops infection before it starts.

These can be effective before a fungus is present, or when a fungus is present but has not yet entered the plant. Once your plant is already showing symptoms of infection, it’s too late for protectant fungicides to have an effect.

What is an Eradicant Fungicide?

These fungicides are the most effective in the early stages of infection, especially in the first 72 hours, and are not a guarantee that the plant will be saved or the fungus will be completely wiped out, especially if symptoms are present and advanced.

So, should you choose an eradicant or protectant fungicide? That depends upon several factors, including what time of year it is, what plants you’re growing, whether they are prone to fungus, and whether you think they are infected or not.

Protectant fungicides are best for areas and plants that have shown symptoms of fungus in past growing seasons, to be applied before that time in the present growing season.

Eradicant or curative fungicides should be used if you suspect a fungus is already present, such as if symptoms have begun to show on neighboring plants. They will have some effect on plants that are already displaying symptoms, but they work much better if you can catch it before that.