Star Shaped Plants For May The Fourth 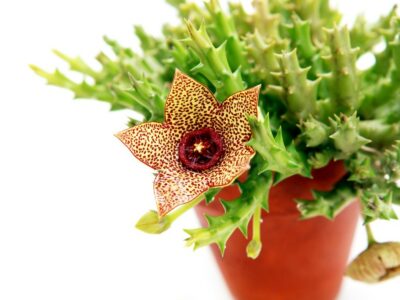 The big day is almost upon us — that would be May 4th, the unofficial commemorative day celebrating the Star Wars franchise created by George Lucas. This might be a good day to celebrate by planting Star Wars plants, albeit those with star-shaped flowers that are found right here on earth.

Plants with star-shaped flowers aren’t a rarity. The simple arrangement of five petals can be found in the common bellflower. Of particular note in the Campanulaceae family, however, is Isotoma axillaris, common name laurentia. Native to Australia, laurentia is hardy in zones 7-10 and is also known as blue star plant or star flower. It produces fragrant star-shaped blooms of blue, pink or white throughout the growing season up until the first frost.

Another option for the Star Wars planter is the Texas Star hibiscus, a tropical giant with scarlet star-shaped blooms borne upon glossy green foliage. A cold tolerant perennial, Texas Star plant (Hibiscus coccineus) is hardy from zones 5-10. This star plant can reach 6 feet (2 m) in height and should be planted in full sun with abundant moisture and monthly applications of a balanced fertilizer.

Egyptian star is another option for the Star Wars fan. Native from Yemen to East Africa, Egyptian star plant is winter hardy to USDA zones 10-11 but can be grown as an annual in other areas. This specimen grows 1-2 feet (30-61 cm.) tall outside of its native habitat and 3-6 feet (.9-1.8 m.) tall within. Multi-branching with a sprawling habitat, this star plant features clusters of 4 inch wide pink, magenta or white star-shaped blooms.

Arguably one of the more spectacular shar-shaped flowers can be found on the epiphytic plant Angraecum sesquipedaie also known as “Darwin’s orchid”. A night blooming orchid native to the coastal forests of Madagascar, A. sesquipedaie bears large white star-shaped blooms throughout the night when its exclusive pollinator, the hawkmoth whose proboscis is long enough to reach the orchid’s nectar, is flitting about.

Stapelia are perennial succulent plants in the same family as milkweed. Many species in this genus are infamous for having blooms that smell like rotting meat hence their other nomenclature “carrion flower”. Native to South Africa, this bloomer should either be grown in frost free regions or as indoor houseplants.

Other options for a Star Wars themed planter? Star jasmine with its incredibly fragrant blooms, Pentas lanceolata a pollinator attracting plant, Impala lily (Adenium obesum) an evergreen succulent shrub with crimson to white flowers,  and hyacinth ‘Blue Star’, a fragrant bulb that can be planted in the fall for spring blossoms.

May the fourth be with you.