What Is Plant Mutation – Learn About Mutation In Plants 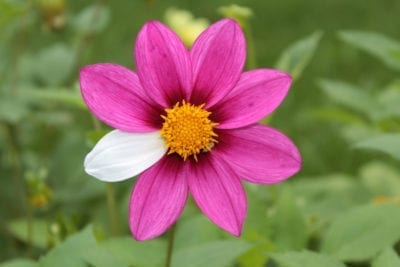 Mutations in plants are a naturally occurring phenomenon that alters the appearance of a plant’s characteristics, most notably in the foliage, flowers, fruit, or stems. For example, a flower may exhibit two colors, exactly half and half. Many times, the mutant plants return to normal the next season.

When a grower notices a favorable plant mutation, he or she can duplicate the effect through cuttings, grafting, or division. Many variegated plants were cultivated from a mutation in a pure green tree or shrub, for example. Most gardeners can relate to finding solid green shoots in a variegated plant when new growth reverts to solid green. Removing the new green shoots can help keep the variegation intact.

Changes in the genetic code occur randomly and can happen when mistakes are made during cell division and replication, after exposure to radiation or certain chemicals or because of weather fluctuations such as extreme cold or heat. Insect damage or severe pruning also can cause a mutation in plants. Fasciation in plants is a good example. Mutations are noticed most often in spring and summer.

Mutations can result in striping on a flower or fruit, variegation, a different color among blooms or foliage, bicolored blooms, a double flower among singles, etc. A chimera occurs when “genetically distinct tissues co-exist within the same plant,” common in roses, dahlias, and chrysanthemums. The mutant plants exhibit different sections of color on a flower.

Fruit can take on a different appearance. For example, in a cut-open orange, part of the fruit may be a darker color than the rest of the fruit. A mutation could appear in the skin of the orange, too, with striping or the thickness of the peel may vary in one section. A sport mutation is also common in fruit. Nectarines are an example of a sport.

Reverting is a type of mutation. For example, a dwarf cultivar may display shoots that have reverted to a parent’s non-dwarf form. Variegation that reverts to pure green also is a mutation.

If the mutation is desirable, it doesn’t hurt to leave it on the plant. An unfavorable mutation can be pruned out. Often, the plant will return to normal on its own.