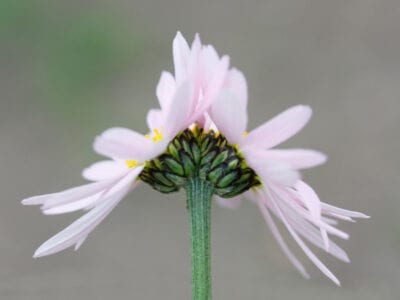 If you’ve ever found a flower stem that looks wide and flattened, splayed, or fused, you’ve probably discovered an odd disorder called fasciation. Some fasciation in plants result in huge, grotesque stems and flowers, while others are quite subtle. Discovering fasciations in your garden or in the wild is intriguing, and one of the fascinations of observing nature. Let’s find out more about the fasciation deformation of flowers.

So exactly what is fasciation in flowers anyway? Fasciation literally means banded or bundled. Scientists aren’t sure what causes the deformity, but they believe it is probably caused by a hormonal imbalance. This imbalance may be the result of a random mutation, or it can be caused by insects, diseases, or physical injury to the plant. Think of it as a random occurrence. It doesn’t spread to other plants or other parts of the same plant.

The result of fasciation is thick, often flattened, stems, and large flowers, or flower heads with far more than the usual number of flowers. The extent of fasciation deformation of flowers depends on where the damage occurs. Fasciations close to the ground affect a larger portion of the plant.

Can Fasciation Be Treated?

Can fasciation be treated once you spot it? In short, no. Once the damage is done, you can’t correct fasciation on that particular stem. In some cases, you may be able to prune out the affected stems without damaging the plant. The good news is that perennials that exhibit fasciation may be perfectly normal next year, so there is no need to destroy the plant.

Not all fasciation in plants makes them undesirable. The fasciation of a fan-tailed willow makes it a highly desirable landscape shrub. Fasciation deformation of flowers such as the cauliflower-like heads of a celosia is part of the charm of the plant. Crested saguaro cactus, fasciated Japanese cedar, beefsteak tomatoes, and broccoli are all examples of desirable fasciations.

While fasciation in flowers is usually a one-time occurrence, sometimes the fasciation is carried in the plant’s genetic material so that it reoccurs from generation to generation. More often, fasciated plants have to be propagated vegetatively to carry on the unusual characteristics.

A fasciated plant can be a monstrosity or an interesting variation, and the difference is often in the eye of the beholder. Some gardeners will want to immediately replace the plant with one that looks more like its neighbors, while others will want to keep it as a curiosity.