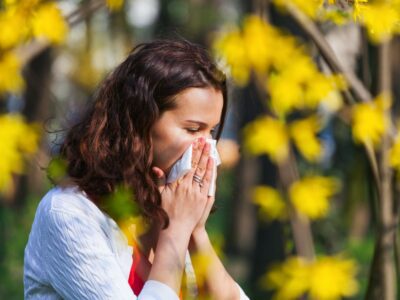 Ugly Plants that Cause Allergies

If you’ve ever heard that uglier plants cause more severe allergic reactions, you might be surprised to know it’s true. Allergists say that flowers that smell or look pretty attract pollinators while those that produce uglier blooms are generally wind pollinated. In other words, they are the allergy sufferer’s nemesis.

Spring is the peak season for tree allergens. In order of bloom time, trees that plague allergy sufferers include maple, willow, poplar, elm, birch, mulberry, ash, hickory, oak, and walnut and are generally an issue from March through May. Additional trees that may be problematic include alder, aspen, beech, box elder, cedar, cottonwood, juniper, olive, and pecan.

Trees that are dioecious or unisex such as ash, poplar, and willow are not problematic if a female tree is planted. Female trees produce no pollen, thus are not allergy triggers.

Other trees such as fruit trees that flower are pollinated by bees and other pollinators and are not problem allergens.

That said, there are some flowers that will bother allergy sufferers. These include plants in the aster or daisy family, baby’s breath, dahlias, chamomile, sunflowers, amaranth, and lavender. Although not usually included in a garden, ragweed, a member of the aster family, is often a major allergic trigger.

Other Plants that Cause Allergies

Grasses are a major allergy culprit for many people. Grass pollens usually appear in the late spring to early summer. While there are hundreds of species of grass relatively few cause allergies. The following are most likely to cause allergies: bahia, bermuda, bluegrass, fescue, Johnson, Kentucky blue, orchard, redtop, and Timothy.

By summer and into the fall, allergy culprits are weeds such as the aforementioned ragweed, lamb’s quarters, pigweed, English plantain, mugwort, and wormwood.