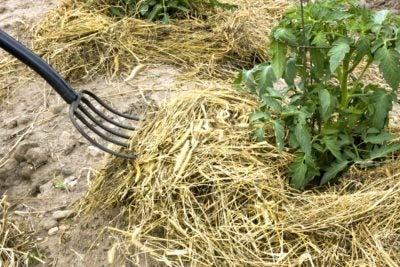 Mulching with hay is a gardening secret that only a few know about. Even the most beginner gardeners among us know about mulch, but there are so many different options: hay and straw, woodchips, leaves, compost, and even rocks. Hay, though, just may give you the best yield you’ve ever gotten out of your garden.

The first thing you need to know is that there is a difference between hay and straw. We tend to use the words interchangeably, but there is a big difference:

Can You Mulch with Hay in the Garden?

The answer is yes, and many master gardeners swear by it. It’s not an obvious choice because it is soft, dense, and spongy. It soaks up water and remains moist, which may seem a little unsanitary. Then there are the seeds, which are minimal in high quality hay, but are always present to some degree and are likely to include weed seeds.

Using hay as mulch has some surprising benefits. It does indeed break down, but unless you have a very wet environment it shouldn’t get moldy. Instead, it will start to compost, creating a rich layer of nutrients for your plants. This is especially good for seeds and starter plants. They thrive in the warm, moist, and nutritious cover and soil provided by the hay.

How to Mulch with Hay

Hay will not give you a dry layer of cover that is pleasing to look at, but it is a great mulch for growing flowers and vegetables, and you’ll get a fantastic yield.

To start a garden, with seeds or starters, first create a thick layer of hay, up to 8 inches (20 cm.), right over your garden soil. There is no need to till the soil or enrich it with topsoil. Push seeds and starters right into the hay and watch them grow.

Mulching your garden with hay using this method may require a large quantity, but you won’t need to add the same amount year after year. Be sure to get hay of the best quality to limit the amount of seeds and get ready for a big yield of vegetables and flowers.