Why Use Colored Plastic Mulch: Learn About Different Colors Of Mulch 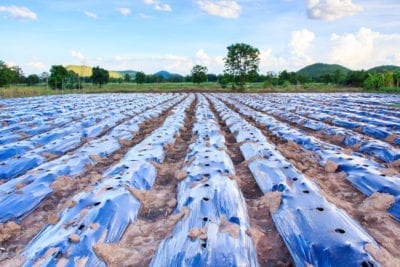 If you’re a gardener who has always used a standard type of organic mulch, you may be surprised to learn about the popularity of plastic mulch. It has been used to increase crop yields for decades. Plastic mulch is now available in an array of colors, with different mulch colors said to assist in different garden tasks. If you want to learn more about plastic colored mulches and their uses, read on.

Plastic mulch, virtually unknown just a little while ago, is coming into its own. These days, many farms and backyard gardens use “plasticulture” to modify microclimates and improve crop quality. In fact, the benefits of using plastic mulch are numerous. It warms the soil, minimizes evaporation, limits leaching of nutrients from the soil, and results in more and better crops that are ready to harvest earlier.

Mulch, of course, is a material you layer over garden soil to reduce weeds, hold in water, and control soil temperature. The plastic mulch on the market aids crop growth by either reflecting, absorbing, or transmitting the sunshine. The colors of mulch determine its impact on a crop.

You may have seen the rolls of black plastic mulch available at garden stores. If you look around though, you’ll also find mulch in different colors in commerce, from yellow to green to red. Colored plastic mulch is not intended to be ornamental. Each of the different mulch colors is said to work well in a particular circumstance or with a particular crop. You pick your mulch colors to match your garden needs.

Colors of Mulch and Benefits

The research on the benefits of plastic colored mulches is far from complete, so these products are not sold with guarantees. However, preliminary research suggests that mulch in different colors can be used achieve different results.

Of all the colors of mulch, black is perhaps the most prevalent and the least expensive. It is said to suppress weeds better than any other plastic mulch thanks to its opacity. It also keeps soil warm during the growing season, raising the soil temperature by up to five degrees at a 2 inch (5 cm.) depth. That allows you to put out plants earlier and expect a quicker harvest.

On the other hand, red colored plastic mulch is said to work much better for some crops. For example, tomatoes in some studies yielded 20 percent more fruit on red mulch colors, and strawberries grown on red plastic mulch were sweeter and had a better fragrance.

How about blue mulch? Blue plastic colored mulches are better than black for big harvests if you are planting cantaloupes, summer squash, or cucumbers, according to reports. Silver mulch is great at keeping aphids and whiteflies away from crops and also reduces the population of cucumber beetles.

Both brown and green colors of mulch are available in infrared transmitting plastic (IRT). This type of mulch is said to warm up your soil better than plastic mulch in the beginning of the growing season. Green IRT mulch also seems to support an earlier ripening date for your cantaloupe crops, with higher yields of fruit.