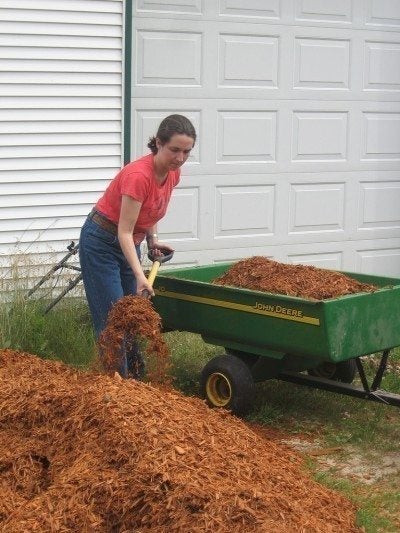 The hemlock tree is a majestic conifer with fine-needled foliage and a graceful form. Hemlock bark has a high concentration of tannins, which seem to have some pest repellent aspects, and mulch made of the wood is attractive and useful in the garden. There are some concerns, however, regarding the safety of the mulch in the landscape, but most of this is due to a mistaken identity.

What is Hemlock Mulch?

Hemlock is a softwood tree used for many industrial purposes. Its bark has a rich, red to orange or burgundy color, which accents plants in the garden and creates contrast among all the green growing things. It is an organic mulch that may be finely ground or in larger more emphatic chunks.

Organic mulches aid in water retention, keep weeds down, beautify the landscape, and gradually compost into the soil, releasing nutrients and improving porosity and tilth. Prized for the deep colors, using hemlock mulch also adds its tones to the vibrant hues of the diverse garden. The depth of the color depends upon what part of the tree the mulch comes from and the length of the aging process.

Is Hemlock Mulch Safe to Use?

Poison hemlock is a bushy plant that grows wild along roadsides, in fields, and in forests. It has a speckled purple stem and large deeply divided leaves, with a decidedly herbaceous texture. The plant is very toxic and even a small amount ingested by a pet or small child can make them very sick or even cause death. Consumers that wonder “is hemlock mulch safe to use?” are usually mistaking the poison hemlock for the conifer hemlock, which is not toxic.

Using hemlock mulch around ornamental plants and trees is a healthy and attractive soil amendment. But can you use hemlock mulch in a vegetable garden? Hemlock mulch on veggies will not harm the food, but the thick pieces compost more slowly than other soil amendments and actually reduces the available nitrogen in soil as it breaks down.

A better choice would be manure, nut hulls, grass clippings, or even straw, all of which will break down and add nutrients to the soil more quickly. If you are in a pinch, however, you can certainly use hemlock mulch on veggies without fear of it tainting your produce.

Pets, especially young ones, like to mouth everything around them in their search to satisfy their curiosity about items they find in their environment. This is much like a toddler, but it is harder to watch Fido every second of the day if he/she is an outdoor pooch.

Hemlock mulch has been deemed safe by the ASPCA. Of course, you could still encounter some vomiting or diarrhea if your dog goes nuts and eats a lot of the bark mulch. Another alternative if you are concerned is cedar mulch with a distinctive scent that dogs don’t enjoy.