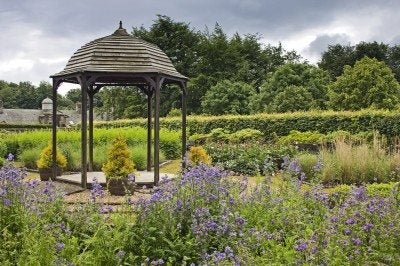 What is a garden folly? In architectural terms, a folly is a decorative structure that serves no real purpose other than its visual effect. In the garden, a folly is created simply to amaze and delight.

Although follies are found around the world, they are most common in Great Britain. The first follies were expensive structures built on the estates of wealthy English landowners in the late 16th and early 17th centuries. The elaborate follies were often named after the owner, builder, or designer.

Follies reached a peak of popularity in the 18th and 19th centuries, when they became an important component of elegant French and English gardens. The designs were based on the picturesque, melancholy ruins and gothic temples of Egypt, Turkey, Greece, and Italy.

A large number of follies were constructed as “poor relief” projects that kept people from starving during the Irish Potato Famine of the 19th century.

If you’re interested in learning how to create a garden folly, it’s fairly easy. The important thing to keep in mind when planning a garden folly is that follies are eye-catching, whimsical, and fun– but they have no real function. A true garden folly may fool you into thinking it is a real building, but it never is.

For example, a folly can be a pyramid, arch, pagoda, temple, spire, tower, or a single wall. Although they can serve as a focal point in a highly visible area of the landscape, they are often tucked away as a surprise in a “secret garden.”

In practical terms, garden follies in the landscape may be part of an overall design, or the structures may be placed to hide unsightly sheds or compost heaps. Sometimes a gothic stone castle wall hides a barbecue grill or outdoor pizza oven.

You can build your own garden folly with materials such as concrete, stone, or wood using your own plan or a blueprint found online. Some modern-day follies consist of plywood with a stone veneer.