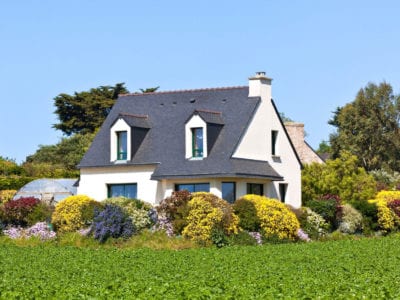 Symmetry and order are the cornerstones of French garden style. They form the “bones” of the garden within, which are geometric designations along with areas of confined perennials and grasses and more rigid designs of formal hedges, parterre, and topiaries.

French garden design will also be viewed as a mirror image wherein both sides of the landscape reflect each other. French garden style incorporates neat, defined spaces, a cool color palette, and numerous stone elements as well.

French country gardens tend to be less strict in their construction. They are designed to be viewed from a distance, usually to complement a chateau or other large estate yet because they are designed on country estates, have a more natural, relaxed feel.

The same rules of formal French garden style will prevail but where plants would be constrained, they will be unbridled in a French country garden. In general, there will be less structure, although gardens will still be contained by a border of some type. Gravel beds will still lead one down the path but to gardens filled with riotous colors.

First off, think about French garden design before you dive in. French garden style, country or not, is defined by its formality. Formal gardens take lots of work, so ask yourself if you can devote time to making the garden look its best.

Next, unless you are very talented, use a landscape architect to help you with your plans. A French country garden can become very complicated, especially given that it is segmented into geometric shapes outlined by a border that transitions into the next “room.”

When picking French garden plants, use climbing plants such as climbing roses, ivy, grapes, or honeysuckle that will clamber up the house, shed, or wall. Also, don’t include one of everything. A French garden is an edited garden comprised of similar palettes. Yes, expand the color scheme in your French country garden, but don’t make it too gaudy.

Implement French inspired items such as glazed pots. Use espaliered fruit trees and groomed boxwoods to make a statement. Other elements to include would be rubble walls, wrought gates, and tall hedges which will instill an element of privacy.

Include your kitchen garden or potager into your French garden design. In France, the connection between the food we eat and how it is produced is celebrated.

Use edging such as brick or metal, not plastic, to delineate gardens.

At the end of the day, there are traditional elements to a French country garden, but if you want to play around and only use some of the elements, then by all means do so. Your creativity and personal touch will always tell a better story.