Grow Dried Fruit For Fruitcake In The Garden 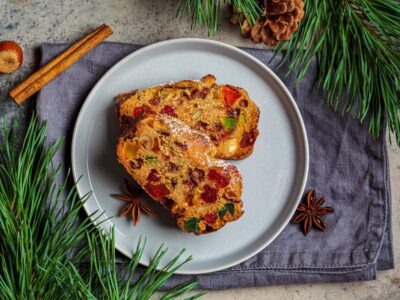 Fruitcake is a holiday staple in certain parts of the world. It is also the butt of many jokes due to its unpopularity (to some), as well as its incredible staying power. But fruitcake also goes back to the Roman period where it was a bit more like an energy bar. What fruit is in fruitcake? The fruit in fruitcake is generally candied and can be almost anything, although some items are more traditional. Combined with nuts and spices, this holiday classic is easy to make, and you can grow your own fruits.

There is a variety of fruit cake in almost every European tradition. Italian panforte, German stolen, and others all have their twist on the candied fruited cake. The resulting concoction is quite heavy and dense, deeply sweet, and often kissed with some alcohol and citrus. Fruitcake fruit runs the gamut from common apples to persimmon seeds. During the cake’s heyday, many of the fruits were dried imported delicacies such as dates. These were candied in a simple process that made a chewy, sweet filling for the cake.

Fruitcake has an incredibly long shelf life. This is due to the cake’s dense texture combined with the dried fruit. The low moisture in the cake makes it very shelf stable. Many cooks believe fruitcake is at its best flavor after storing it for 3 months. The cake usually has some sort of spirits in it, except during Prohibition, where such items were impossible to acquire. In the U.S. south the preferred alcohol is bourbon, but rum, brandy, and other beverages are also frequently used. The candied fruit is also called crystallized fruit due to the crystals that form after it dried. It was often fruits from the harvest that were preserved dried. Once the Postal Service was modernized, fruitcake became one of the most popular mail order treats during the holidays. Its ability to stay good during transit made it a perfect gift.

One popular brand of fruitcake available for purchase lists its ingredients as papaya, raisin, pineapple, and cherry, with walnuts and pecans. The cherry in most fruitcake is maraschino cherries that have been dried to an intense red and green. To make the green, the cherries are soaked in calcium chloride and then sweetened and dyed. Essentially, the original flavor and color are removed, and artificial flavors are added. But these are classics in English fruitcake, and something not to miss if the recipe is traditional. Other fruits are dates, figs, candied citrus, apricots, apples, currants, sultanas, and really any other dried fruit that you prefer. Candied citrus peel is also a common ingredient that helps tone down the sweetness of the other fruits.

If you grow these or any other fruits in your garden, consider adding them to your fruitcake recipe.

How to Make Candied Fruit for Fruitcake

You can candy fruit in 2 ways. The first is by drying the fruit initially. Thicker fruits and those with a lot of moisture work best if they are pre-dried. Apricots, raisins, figs, etc. are dried on a rack in the sun, a low heat oven, or a dehydrator.

Once the fruit is dried, prepare a simple syrup and boil until a candy thermometer reaches 235 degrees Fahrenheit (113 C). Drop the dry fruit into the syrup and turn the heat to medium, simmering it for 20 minutes. Strain out the fruit and place it singly on racks. At this point you can toss it in sugar or simply let it dry.

The second method uses fresh fruit. This works well on items like citrus rind. Make the syrup and boil to soft thread stage. Add the fruit and simmer for 20-30 minutes or until the fruit is translucent. Dry the fruit in the same manner.

Once your fruit is prepared, choose your favorite fruitcake recipe and get baking.