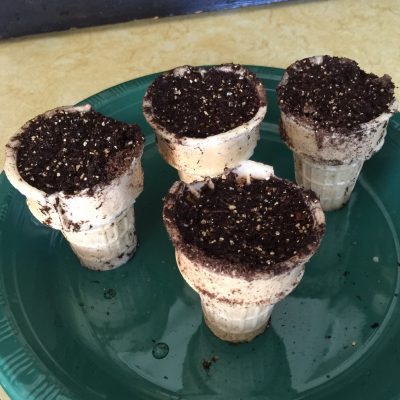 If you are going to have a garden, big or small, you need to either buy starts or if you’re cheap like me, start your own seeds. There are numerous ways to start your own seeds – some of them more economical than others. One of the best ways to start seeds is in a biodegradable container. No waste and no extra time or monkey business trying to get the tiny seedlings from pot to garden plot. A super cool idea that is running amok on the internet is using ice cream cone plant pots. Intrigued? Keep reading to find out how to start seeds in ice cream cones.

How to Start Seeds in Ice Cream Cones

You only need three items for your ice cream cone seedling project: soil, ice cream cones, and seeds. Use a good quality potting soil. As to what type of ice cream cone to use? The basic can be bought in bulk – the flat bottomed variety.

When planting in an ice cream cone, fill the ice cream cone with potting soil, press your seed in and lightly cover, then water. Apparently, after a few days (or up to a week depending on the type of seed), you should see seedlings. This is where my pessimistic nature comes into play. Also, in full disclosure, my editor said she tried this and only got mushy ice cream cones filled with dirt.

Think about it people. If you left ice cream in a cone for a while, the cone would get mushy and fall to bits, right? Now envision damp potting soil inside the cone. I’d say you would get the same results.

But don’t knock it until you’ve tried it. After all, I’ve seen the pictures on Pinterest of success stories by people planting seeds in an ice cream cone. Anyway, if indeed you get seedlings in your cones, simply dig a hole in the garden and plant the whole kit and caboodle in the soil. The cone will biodegrade.

On another note, if this doesn’t work for you and you bought the bulk pack of ice cream cones, I have an idea of how to use them up. A cute spring party favor or place table setting would be to pot a pansy, marigold, or the like. Guests can take them away when they leave. What they do with the cone thereafter is their business, though I would recommend planting them, cone and all, in the garden or another container. Of course, you can just dispense with the whole idea of planting in an ice cream cone, buy a few gallons of ice cream and have your own ice cream party!