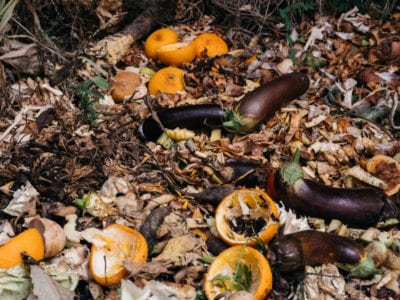 Ammonia smell in gardens is a common problem for the home composter. The odor is the result of inefficient breakdown of organic compounds. Ammonia detection in soil is as simple as using your nose, but the cause is a scientific matter. Treatments are easy with a few trick and tips found here.

Composting is a time honored garden tradition and results in rich soil and nutrient density for plants. Ammonia smell in gardens and compost heaps is an indicator of inadequate oxygen for microbial activity. Organic compounds cannot compost without adequate oxygen, but the fix is a simple one by introducing more oxygen to the soil.

Compost ammonia odor is frequently observed in piles of organic matter which have not been turned. Turning of compost introduces more oxygen to the matter, which in turn enhances the work of the microbes and bacteria that break down the matter. Additionally, compost that is too rich in nitrogen requires air circulation and the introduction of a balancing carbon, such as dry leaves.

Mulch piles that are too moist and do not get air exposure are also prone to such odors. When mulch smells like ammonia, simply turn it frequently and mix in straw, leaf litter or even shredded newspaper. Avoid adding more nitrogen-rich plant matter such as grass clippings until the smell is gone and the pile is balanced.

Compost ammonia odor should dissipate over time with the addition of carbon and frequently moving the pile to add oxygen.

Purchased mulch and compost may not have been processed fully, leading to anaerobic odors such as ammonia or sulfur. You can use a soil test for ammonia detection in soil, but extreme conditions will be obvious just from the smell. The soil test can indicate if pH is too low, around 2.2 to 3.5, which is harmful to most plants.

This mulch is called sour mulch, and if you spread it around your plants, they will quickly become adversely affected and may die. Rake or dig out any areas where sour mulch has been applied and pile up the bad soil. Add carbon to the mixture weekly and turn the pile frequently to correct the problem.

Industrial treatment plants use chemicals to balance bio-solids and composting organic materials. They can introduce oxygen through a forced aeration system. Chemicals such as hydrogen peroxide and chlorine are part of professional systems but the average homeowner shouldn’t resort to such measures. Treating common ammonia odors in the home landscape may be done by the addition of carbon or simply applying liberal amounts of water to leach the soil and a lime treatment to increase the soil pH.

Tilling in leaf litter, straw, hay, wood chips and even shredded cardboard will gradually fix the problem when mulch smells like ammonia. Sterilizing the soil also works, by killing off the bacteria, which are releasing the odor as they consume the excess nitrogen in the soil. This is simple to do by covering the affected area with black plastic mulch in the summer. The concentrated solar heat, cooks the soil, killing the bacteria. You will still need to balance the soil with carbon and turn it after the soil cooks for a week or more.