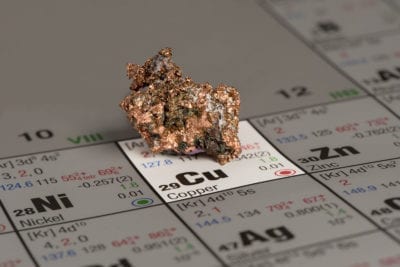 Copper is an essential element for plant growth. Soils naturally contain copper in some form or other, ranging anywhere from 2 to 100 parts per million (ppm) and averaging at about 30 ppm. Most plants contain about 8 to 20 ppm. Without adequate copper, plants will fail to grow properly. Therefore, maintaining fair amounts of copper for the garden is important.

On average, the two factors that commonly influence copper are the soil pH and organic matter.

Inadequate levels of copper can lead to poor growth, delayed flowering, and plant sterility. Copper deficiency in plant growth may appear as wilting with leaf tips turning a bluish green color. In grain-type plants, the tips may become brown and appear to mimic frost damage.

How to Organically Add Copper to Your Garden

When considering how to add copper to your garden, remember that not all soil tests for copper are reliable, so careful examination of the plant growth is important. Copper fertilizers are available in both inorganic and organic forms. The rates for application should be followed closely to prevent toxicity.

Generally, the rates of copper are about 3 to 6 pounds per acre (1.5 to 3 kg. per .5 hectare), but this is really dependent on the soil type and plants grown. Copper sulfate and copper oxide are the most common fertilizers for increasing copper levels. Copper chelate can also be used at about one-quarter of the recommended rate.

Copper can be broadcast or banded in the soil. It can also be applied as a foliar spray. Broadcasting is probably the most common method of application, however.

Although soil rarely produces excessive amounts of copper on its own, copper toxicity can occur from the repeated use of fungicides that contain copper. Copper toxicity plants appear stunted, are usually bluish in color, and eventually turn yellow or brown.

Toxic copper levels reduce seed germination, plant vigor, and iron intake. Neutralizing copper soil toxicity is extremely difficult once the problem occurs. Copper has low solubility, which enables it to persist in the soil for years.