Effect Of Fire On Soil: Learn How Fire Can Help And Hurt Soil 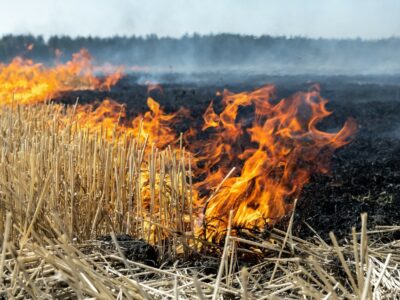 Everybody is talking about prescribed burns these days as a means of preventing catastrophic forest fires. But one shouldn’t forget the negative effects of fire on soil.

Is Fire Good for Soil?

The first questions to ask: what is the effect of fire on soil? Is fire good for soil? Generally, the answer is no, the effects of forest fire can be devastating for soil.

Fire can be good for forests, wildlife, and vegetation if it does not get out of hand. Prescribed burns help to maintain wildlife habitat for both game and non-game species, especially if some sections are left unburned to provide nesting areas. It also prevents forest overcrowding and reduces the severity of future wildfires.

But fire doesn’t do much for soil. In fact, if landowners do not take steps to protect the soil after a fire, much of it can be lost in subsequent rains. In addition, intense fire can result in hydrophobicity a condition that makes the soil repel water.

Effects of Fire on Soil

When a wildfire sweeps through a forested area, it increases the potential for severe soil erosion. As the fire burns through, it turns plant material to ash and destroys fallen leaves and the litter layer.

Since shrubs, trees, and grasses stabilize the soil, their loss is significant. Where stems and leaves stop the water flow and give it time to sink into the soil, this protection disappears after a fire. Water passes through, carving out soil and carrying it along.

Other Effects of Forest Fire

In addition, when forest fires burn hot, the extreme temperature alters the chemistry of soil. Plants that are burned up release a gas that penetrates the oil. As the gas cools, it becomes waxy and coats soil particles. This soil looks just like regular soil, but it has changed into a disaster.

This condition is called hydrophobia. The soil is unable to absorb rainfall and in fact repels water. As the water runs off without penetrating the soil, it causes significant issues with runoff and erosion. The immediate risk from hydrophobia and water repellent soil is flash flooding and the flow of debris and mud.