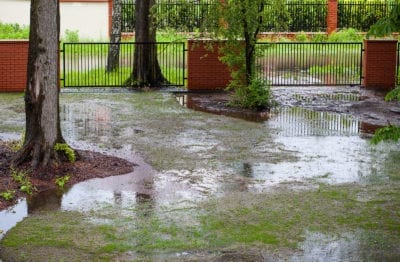 Heavy rainfall followed by flooding not only causes damage to buildings and homes, but can also affect plants in the garden. Unfortunately, there is little that can be done to save a garden that’s been flooded. That being said, you may be able to minimize the damage in some cases. The extent of most flood damage in the garden is dependent on the time of year, duration of flood waters, plant sensitivity to garden flooding, and type of soil the plants are growing in. Let’s learn more about flood damage clean up in the garden.

Flood Damage in the Garden

When plants are exposed to standing water for long periods of time, the roots can suffocate and die. Toxic compounds can also build up in saturated soils. Photosynthesis is inhibited, slowing or stopping plant growth. Excessively wet soils also favor fungal growth.

Flood damage to ornamental plants from rising water generally is not as extensive as with vegetable crops. In addition, dormant plants are more tolerant than actively growing plants to flooding. Newly planted seeds and transplants may not survive even short-term flooding, and seeds may have washed away. Resist the urge to replant immediately; give the soil a chance to dry out first.

Most flood damage in the garden that does occur results from standing water that’s lasted for several days or even weeks. As long as the water recedes within a few days, most shrubs and trees will normally bounce back with little to no damage. For some plants, a week or more of flooding can cause severe injury and death, particularly for vegetable crops and tender herbaceous plants. Tree and shrub species that are especially sensitive to gardening flooding include:

How to Save Plants from Flood Damage

Most plants, especially vegetables, cannot tolerate standing water for any length of time. Therefore, if it’s at all feasible, try to encourage the draining of any excess water from the garden by digging ditches or furrows.

After flood water has receded, you may wash the silt or mud from the leaves during your flood damage clean up. As long as weather permits, however, and the air remains dry, much of this fall from the plant on its own. Then what is left can be hosed down.

As more favorable conditions return, watch for signs of die-back, but don’t be too hasty to prune everything. Branches that have lost leaves aren’t necessarily dead. As long they are still green and pliable, chances are the leaves will regrow. Remove only limbs that are physically damaged or obviously dead.

A light fertilization may be helpful to replace nutrients that have been leached from the soil and to encourage re-growth.

Symptoms of plants under excessive water stress include:

Stressed trees are more susceptible to secondary problems, such as cankers, fungi and insect pests. Tree roots may also become exposed due to soil erosion following flooding. These roots should be covered with soil to prevent drying out and damage of exposed roots. Usually, it takes about a week or so to determine the extent of damage to your plants and whether they will survive.

Undoubtedly, you will need to spray plants with fungicides and insecticides to control diseases and pests that may attack them in their weakened state. If plants are kept free of insect and disease pests, their chances of survival even after a flood are higher.

Other steps to take after a flood:

No special precautions can be taken to prevent flooding of plants because it’s not practical. However, if there’s enough time to prepare, say for a hurricane, you can normally dig up some of your most prized plantings and put them in containers to keep them from being flooded. Container plants should be moved high enough so that flood waters do not reach their root systems.

Since soil type is an important factor with regard to drainage patterns, amending your current soil may help reduce the impact of garden flooding in the future. Keep in mind that sandy soil drains much faster than clay-based soils, which remain wet for longer durations.

Plant in raised beds or use berms to divert excess water away from trees and shrubs. If possible, avoid planting in areas that drain slowly or remain flooded after a heavy rainfall. If your soil is subject to standing water, it is best to plant species that are tolerant to wet soils.