How To Reuse Potting Soil 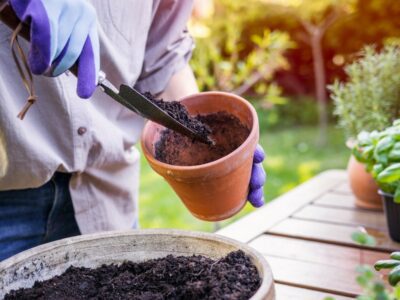 Whether you container garden due to space issues or just like the look of decorative pots, at the end of the season you will be faced with a significant amount of used potting soil. You might then wonder what to do with old soil from pots. Can you reuse potting soil? That’s a good question, and we have the answer.

Can you Reuse Potting Soil?

The first thing you want to do with used potting soil it to sterilize it. Sterilize old potting soil to rid the medium of soil-borne fungi which cause diseases and to kill any harboring pests. That said, if you know you have grown a diseased or pest infested plant in the soil it is best to err on the side of caution and get rid of the soil.

The easiest way to sterilize soil is to let the sun do it. This process is called solarization. All you need to do is place the used potting soil in heavy-duty plastic bags and place them in the sunniest area of the yard.

If you start this process at the end of the growing season, your potting soil will have solarized killing any potential pathogens and be ready to reuse in the spring. Some people skip this step and move onto step two of revitalizing used potting soil.

If you have solarized the potting soil, the good news is that any harmful pathogens have been killed off. The bad news is that so have all the beneficial microbes. Even if you choose not to sterilize your used soil, the previous plants have likely depleted any nutrients from the soil so, regardless, you need to amend the used soil before reusing.

Remove about half of the used potting medium from the container and amend it with half good quality potting soil or a ratio of one third compost to two thirds used soil.

How long can you use the newly amended soil? You can reuse soil for at least three years, often longer provided you continue to put nutrients back into the medium and solarize to kill pests and detrimental pathogens.