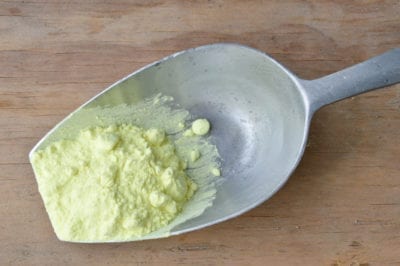 Sulfur is as necessary as phosphorus and is considered an essential mineral. What does sulfur do for plants? Sulfur in plants helps form important enzymes and assists in the formation of plant proteins. It is needed in very low amounts, but deficiencies can cause serious plant health problems and loss of vitality.

What Does Sulfur Do for Plants?

Plants only need 10 to 30 pounds of sulfur per acre . Sulfur also acts as a soil conditioner and helps reduce the sodium content of soils. Sulfur in plants is a component of some vitamins and is important in helping give flavor to mustard, onions and garlic.

Sulfur born in fertilizer assists in seed oil production, but the mineral can accumulate in sandy or overworked soil layers. The role of sulfur as a soil conditioner to reduce sodium requires 1,000 to 2,000 pounds (450-900 kg.) per acre (4,000 square meters). Sulfur deficiencies in soil are rare, but do tend to occur where fertilizer applications are routine and soils do not percolate adequately.

Sulfur is mobile in soil and is primarily borne through fertilizers and pesticides. Another main sulfur source for plants is manure.

The ratio of sulfur in plants is 10:1 and carried in the tissues of the plant. Much of this is brought up from natural soil decay and previous plant matter. Some minerals found in soil contain sulfur, which is released as the minerals break down.

A less obvious sulfur source for plants is from the atmosphere. Burning fuels releases sulfur dioxide, which plants take into their tissues during respiration.

Plants that are not able to intake enough sulfur will exhibit yellowing of leaves that seems remarkably similar to nitrogen deficiency. With sulfur depletion, problems tend to show up on the younger leaves first followed by the older leaves. In plants depleted of nitrogen, the older leaves at the bottom are first affected, moving upwards.

Deposits of gypsum in the soil strata can capture sulfur and older plants with long roots may recover once they reach this level of soil. The role of sulfur as a nutrient is most evident on mustard crops, which will exhibit scarcity symptoms early in development.

Soil tests are not reliable and most professional growers rely on plant tissue tests to verify deficiencies in soil.

Gardeners in areas with limited rainfall and little limestone will have high pH levels. Most plants enjoy moderate pH, so it’s important to lower that level. Sulfur is useful for this but its application depends upon your pH level.

The National Gardening Association has a handy pH calculator that will tell you how much sulfur you need to add to acidify your soil slightly. The easiest form of sulfur is 100 percent finely ground sulfur, which is found in fungicides or just pure as a soil amendment.

Sulfur is not normally needed in the home landscape. If your plants exhibit signs of sulfur depletion, try a side dress of manure. It won’t harm the plants and will slowly leach sulfur in the soil as it composts into the earth.

Sulfur is always recommended for seed oil crops and usually is applied from sulfur dusts or pesticides. Most fertilizers will also contain enough sulfur to restore soil levels. Be cautious and follow instructions with sulfur gardening usage. Too much sulfur may be retained in soils and cause other nutrient uptake issues. Start with moderate applications and use natural products.