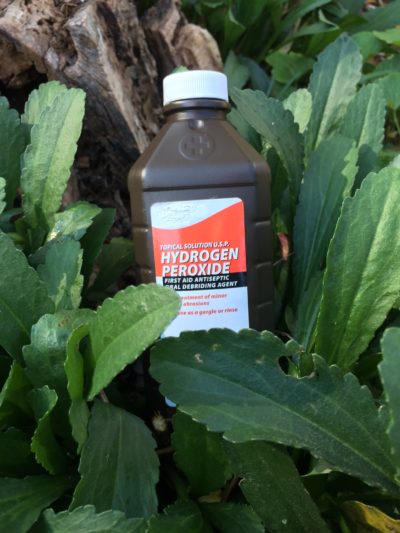 Almost anything in large quantities can be harmful, and using huge doses of hydrogen peroxide in the garden is no exception. When using hydrogen peroxide for plants, however, the solution is generally diluted, making it especially safe. Also, it is recognized by the United States EPA, giving it an extra seal of approval.

Hydrogen peroxide is made up of the same atoms that water is made from with the exception of an additional oxygen atom. This extra oxygen (H2O2) gives hydrogen peroxide its beneficial properties.

How to Use Hydrogen Peroxide

Hydrogen peroxide can be used for any of the following in the garden:

While it has also been used as a general “fertilizer” either added in during watering or sprayed onto the foliage, hydrogen peroxide is not a fertilizer, but it can help boost plant growth. How exactly? Hydrogen peroxide helps encourage healthy root growth because of the extra oxygen molecule. Oxygen can help plant roots absorb nutrients from the soil. Therefore, this extra bit of oxygen better enables the roots to absorb more nutrients, which means faster, healthier, and more vigorous growth. As an added bonus, hydrogen peroxide can help discourage unwanted bacteria/fungi that may be lurking in the garden.

To give plants an added boost of oxygen or for pest control using the 3% solution, add 1 teaspoon (5 ml.) per cup (240 ml.) of water in a spray bottle and mist the plant. This amount is also suitable for pre-treating seeds to control fungal infections. For plants with root rot or fungal infections, use 1 tablespoon (15 ml.) per cup of water. The solution can be made up and stored for future use, but be sure to store it in a cool, dark place as exposure to light diminishes the potency.

If you want to cover a larger area, it might be more economical to purchase 35% hydrogen peroxide. For 10 gallons (38 liters) of water, add 3/4 cup (180 ml.) plus 4 teaspoons (20 ml.) of the 35% hydrogen peroxide. Mix the solution in a large container, garden sprayer, or bathtub. Water at the base of the plants and avoid wetting the foliage. Be very careful when using this percentage of peroxide. It can bleach and/or burn the skin. Spray the veggie garden after every rainfall or as needed.

Not only is this an environmentally friendly alternative to pesticides, but it has the added benefit of being anti-fungal and gives plants a healthy boost of oxygen too. Also, 3% peroxide solutions are commonly available (even at the 99 cent store!) and generally extremely economical.