How To Use Bird Netting For Garden Pest Protection 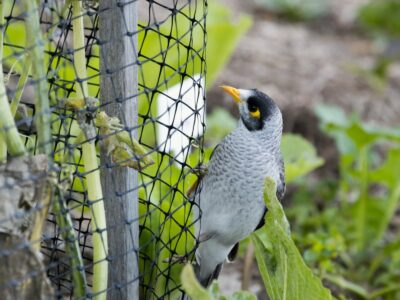 Gardeners with fruit trees and other plants that produce food are familiar with using netting for birds. Bird netting for gardens is inexpensive and reusable, provided it is removed after harvest. Birds don’t want to get tangled in the stuff and have trouble reaching the fruit without getting ensnared. The thin mesh is easy to use, lightweight, yet durable. And there are other ways to employ the netting in the garden.

Bird netting may simply be draped over trees, canes, or other plants. But getting it off the branches to harvest fruit is tricky. A better way is to erect supports around the plant and drape the netting over it. Secure it to the ground with soil staples. Alternatively, the gardener can make a structure out of PVC, wood, or other materials, which will hold the netting up above the plant. If the support is tall enough, it is easy to duck under the netting to harvest. Netting for birds won’t last forever if exposed for years to light, cold, wind, and other factors. It should be removed after harvesting, both to preserve the netting and perform any necessary maintenance.

Other Reasons to Repel Birds

Netting is most often used to prevent birds from eating all your harvest, but it has other uses too. A koi pond is a tempting target for fishing birds like herons. Suspend bird netting 6-12 inches (15.24-30.48 cm) above the water surface. Secure it tightly so large, long beaked birds can’t get tangled in it while trying to nab a fish. There are other methods to prevent attacking fishers but this is simple, inexpensive, and an easy solution.

Another way to use bird netting is to prevent collisions with large windows. Stretch netting out away from the window so birds will bounce off of the lightweight material rather than hitting the hard window.

If you or your neighbor has a persistent kitty bent on digging up plants and bulbs, bird netting may be the solution. When trying to establish young plants, erect a cage around them to prevent the cat’s actions from damaging them. Simply laying bird netting over the soil secured with soil staples will prevent feline encroachment, as they hate walking on the stuff. If you are trying to establish a stand of catnip, bird netting is especially valuable. The scent will attract cats who want to lie in the plant and nibble. This can kill brand new plants. Drape netting over a cage of chicken wire or other structure to keep desirous kitties out of the area until the plant is robust enough to endure such attacks.