Reblooming A Bromeliad: Getting Bromeliads To Bloom 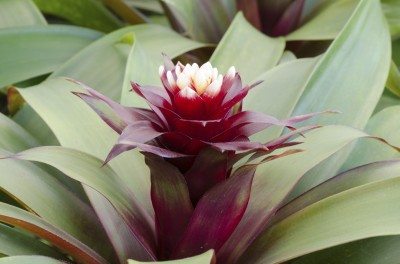 Bromeliads can be found clinging to trees and cracks in cliffs in some regions. But even if you aren’t lucky enough to see them in their wild state, bromeliads are commonly grown as houseplants and easy to find at nurseries and garden centers. They usually come in bloom and the spectacular flower lasts a few weeks or up to a month.

Do bromeliads only flower once? Yes. Getting bromeliads to bloom again isn’t possible, but the plant produces a next generation of bloomers called offsets that will.

Epiphytes are plants with gripping roots that hold the plant onto its chosen surface. This surface may be tree bark, rock or even cement. In indigenous terrain, you can see epiphytic bromeliads literally swinging from the trees. They produce fascinating and colorful flowers, called an inflorescence, surrounded by rosettes of thick green to silver leaves. Reblooming a bromeliad won’t work because they only produce one flower in the plant’s lifetime.

Bromeliads grow in a rosette with a cup-like depression at the center. This depression is responsible for collecting nutrients and water. Unlike most plants, the roots of a bromeliad are mostly for adherence purposes and do not uptake the plant’s needs. Rainwater and dew fall into the cup and other plant litter, small insects and organic material end up in the depression, serving as a source of minerals. The rosette grows by adding new leaves in the center, which becomes impossible after the flower has bloomed. For this reason, increased growth is done through separate plantlets at the base, or offsets, and the adult bromeliad won’t flower again.

Getting Bromeliads to Bloom

Although the adult bromeliad won’t bloom, with a little tender loving care, those pups or offsets will flower eventually.

Forcing a Bromeliad to Bloom Sooner

Reblooming a bromeliad adult isn’t possible but a few tips will see those young offsets in bloom sooner.