Types Of Tillandsia – How Many Varieties Of Air Plants Are 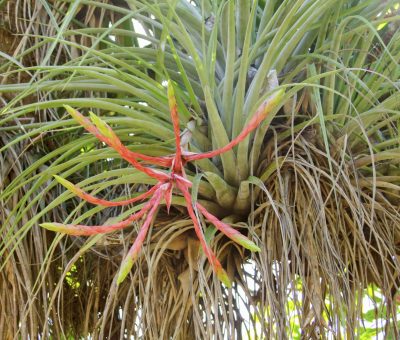 Air plant (Tillandsia) is the largest member of the bromeliad family, which includes the familiar pineapple. How many varieties of air plants are there? Although estimates vary, most agree there are at least 450 different types of tillandsia, not to mention countless hybrid varieties, and no two air plant varieties are exactly the same. Ready to learn about a few different types of air plants? Keep reading.

Tillandsia plant types are epiphytes, a huge group of plants with roots that anchor the plant to a host – often a tree or a rock. Epiphytes are different from parasitic plants because, unlike parasites, they take no nutrients from the host plant. Instead, they survive by absorbing nutrients from the air, from composted material on the host plant, and from the rain. Examples of well-known epiphytes include various mosses, ferns, lichens, and orchids.

Tillandsia air plants range in size from less than an inch (30.5 cm.) to more than 15 feet (4.5 m.). Although the leaves are often green, they may be red, yellow, purple, or pink. Many species are fragrant.

Here are some different types of air plants.

T. aeranthos – This species is native to Brazil, Uruguay, Paraguay, and Argentina. Aeranthos is a popular air plant with scaly, silver-blue leaves with dark blue blooms emerging from dark pink bracts. It is available in several forms, including a number of hybrids.

T. xerographica – This hardy air plant is native to the semi-desert regions of El Salvador, Honduras and Guatemala. Xerographica consists of a spiral rosette that can grow to widths of 3 feet (1 m.), with a similar height when in flower. The silvery-gray leaves are wide at the base, curling to narrow, tapered tips.

T. cyanea – This widely cultivated air plant displays loose rosettes of arching, dark green, triangle-shaped leaves, often with a stripe near the base. The spiky blooms are purple and vivid pink to dark blue.

T. ionantha – The ionantha species includes several air plant varieties, all compact, striking plants with plentiful, curved leaves measuring about 1 ½ inches (4 cm.) in length. Leaves are silvery grayish-green, turning red towards the center before the plant blooms in late spring. Depending on the variety, blooms may be purple, red, blue, or white.

T. purpurea – Tillandsia plant types include purpurea (which means “purple”). Purpurea is appropriately named for the bright, reddish-purple blooms, notable for their mild, cinnamon-like aroma. The leaves, which reach up to 12 in (30.5 cm.) long, grow in a spiral fashion. The stiff leaves are a lovely shade of purple-tinted mauve.

Printer Friendly Version
Read more about Epiphytes
<PreviousNext>
Did you find this helpful? Share it with your friends!
FacebookTweetPinEmail
Related Articles
Newest Articles
You might also like…
Additional Help & Information